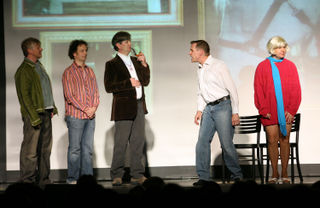 At the end of their rousing live performance last night, the Kids in the Hall told the crowd at Caesars Palace for The Comedy Festival that not only had they witnessed the Kids' "first show in about three months," but also their Vegas debut. "You got to see us shake the rust off," they quipped.

Dave Foley, Bruce McCulloch, Kevin McDonald, Mark McKinney and Scott Thompson certainly didn't seem rusty last night, though, hamming their way through more than an hour of new sketches they have shared with North American audiences over the past year. That includes the return of the Chicken Lady, Buddy Cole, and an encore with the head crusher that entertained despite technical difficulties with McKinney's video camera. After two decades, the Kids may have gotten older, but they're still full of energy and comedic chemistry. And as I learned after the show, they get as much of a kick — if not more of one — out of their live gigs as they did with their TV show during the 1990s. You can see that in their live act, too. They're not a sketch troupe attempting to duplicate or reenact their popular TV sketches. They're five guys actively writing new material that works live, and also willing to ad-lib, riff, giggle and make you feel as though you're part of something special. Which you are.

Preview clips from the Comedy Central Roast of Justin Bieber