Extra! Extra! Read all about it! Stand-up comedian Kumail Nanjiani got a speaking role (as in, more than a regular extra gig) on last night’s episode of Saturday Night Live, as one of 50 reporters in a sketch lampooning the liberal elite of the New York Times that even FOX News will love and probably want to show a gabillion times on its TV network, which probably explains why NBC hasn’t put it on Hulu yet. But let’s not worry about that right this second. Kumail’s part is probably the highlight of the show, which says something about how the audience didn’t react to the celebrity cameos last night. So let’s get to recapping!

The cold open: John McCain comes into a recording studio to personally approve each of his messages for campaign ads, which is SNL’s way of skewering both how out of touch McCain is with technology as well as how insane the campaign ads are. Example: Obama supports universal health care, which must mean he supports health care for the entire universe, including Osama bin Laden. Curiously, they also use the "he fathered two black children" joke that I heard a comic use earlier last week in the Boston Comedy Festival. Not accusing anyone of anything. Just noticed the coincidence and passing it along to you. UPDATED: Politico claims Al Franken, original SNL writer and current Minnesota Democratic candidate for the U.S. Senate, conceived of and wrote much of this sketch!

James Franco as host? Well, he knew his lines well enough in one sketch to not even need the cue cards, but in another, he had trouble reading the cards. So a mixed report there. As for his monologue, Jason Sudeikis played off of Franco’s recent enrollment in Columbia University, portraying Franco’s R.A. and already losing his girlfriend to the actor. They also had a guy in the audience playing Franco’s new roommate, Ken Wo, who (who knows?) may have actually been his roommate. That is, if Franco deigned to live on campus. Anyhow. Moving on.

What followed was a return of The Cougar Den sketch, including a reprise cameo by Cameron Diaz, which, this time, received absolutely no surprise reaction from the live studio audience. Interesting. Diaz’s Kiki trotted out her new boytoy, an emo rock kid played by Franco, and the interplay essentially repeated last year’s sketch with Ashton Kutcher. One line from Franco: "It’s all about the sex," elicited a funny reaction from the cougars (Amy Poehler, Kristen Wiig, Casey Wilson) as they all uncrossed their legs and said: "Really???" Otherwise, nothing to see here. Let’s keep it moving.

After the first ad break, the show continued on a weird, safe/predictable path, as Franco (seen this summer playing a longhaired pot dealer in Pineapple Express) played a longhaired pothead of a secret agent named…wait for it…Agent 420 in a 007 spoof. Wiig sang a Bond-like theme song with background ladies in ’60s go-go-garbs. Franco’s spy goes to take down the evil villian, played by Fred Armisen, only his name is Dr. Wang, and that leads to juvenile jokes. And an accidental pot explosion. It’s a high-concept sketch, but not so much on the payoff. Unless you’re stoned. Oh….I get it now.

After the second ad break, we get to the more better portion of our evening’s program. First up, a sketch about trying to find a jury for the O.J. Simpson robbery trial in Las Vegas. Casey Wilson is the judge, Kenan Thompson is Simpson, Bill Hader is his attorney, and our potential jurors include Will Forte, just out of a 22-year coma; Franco as a guy with amnesia; Armisen as living in a bomb-shelter; Wiig as a Nell-like creature that Bobby Moynihan’s professor character found in the Arctic; Andy Samberg as an alien; and Sudeikis as a guy stranded on a deserted island. Your basic sketch comedy premise created and executed.

Next, an SNL Digital Short (without Samberg? really) a taped introduction to "Murray Hill," which is New York City’s version of The Hills, only secretly replacing the melodrama with a guy (Franco) worried about his "small ding-dong," and Gossip Girl‘s Blake Lively ready to save the day with a cameo.

Quirky. Pretty simple. Am I the only one thinking that because SNL is starting the season with so many consecutive live shows, that Lorne Michaels has his cast and crew cutting corners by making safe and somewhat predictable choices in sketches and plotlines so they can get through the first couple of months? This show also seemed to have fewer live sketches, with sketches running long (one lasted 7 minutes!) and more use of previously taped footage. Hmmmm.

Oh, here’s a winner! Coming soon on TNT…Penny Marshall (Armisen) as The Looker. If you enjoy Kyra Sedgwick’s (Wiig) turn as The Closer, check out Marshall’s staredown of criminals. They get in, they get out within two minutes. Nicely done.

Weekend Update started late, didn’t it? 12:15 a.m. start time, but Poehler leads things off with a good joke about the financial crisis: "Basically, if your commercials air during golf tournaments, you’re done!" Also nice: Jokes about McCain supposedly creating the BlackBerry; "Set your phasers on stunning!" Dora the Explorer voiced by Rosie Perez?! Sudeikis plays the Lehman Brothers CEO, naked in a barrel because he missed the government bailout by…that much. But Armisen steals the segment with his take on American Apparel’s Dov Charnoff, facing his fifth sexual harassment lawsuit in his skivvies, and skeeving out Poehler and Seth Meyers to the point of giggling. Also, Paw & Order? OK. UPDATE: Videogum and Jezebel provide some snippets.

As the final half-hour — always the most unpredictable and risk-taking — begins, we get that sketch taking on the New York Times and their 50-person investigation to Alaska for Gov. Sarah Palin. Franco plays the new assignment editor giving out the orders and stumbles over his lines. Kenan wants to stay in NYC to work on the subprime mortgage crisis (nope), Hammond is nicknamed "Queens" because he once slept on the E train and ended up outside Manhattan (shockers), Forte is worried about polar bear attacks, they all think they can take taxis around Alaska, and Sudeikis as the "expert" because he spent a summer with the Anchorage Daily News is flustered. But what made me smile was seeing SNL give comedian Kumail Nanjiani a couple of lines as an Indian reporter (Nanjiani’s Pakistani, but, um, close, right?). As I wrote above, this is a sketch that even FOX News can love. Even at seven minutes long. Nanjiani got called in a couple of days beforehand notifying him he’d gotten an extra extra gig. It’s not on Hulu yet, so enjoy it on YouTube while it lasts…it’s gone. We’ll keep our eyes peeled for it, though.

Two weeks, and twice new cast member Bobby Moynihan has gotten to lead a sketch (that’s some confidence in the new kid, eh?). This time, he plays Lenny to Franco’s George in an alternate "lost" ending to Of Mice and Men. Lenny wises up. "Do people think I’m an idiot?" he asks. Ding, dong, plot twist!

Another quick-hitter, this time hearkening back to a previous taped bit about the closing of CBGB’s, as we get Martin Scorcese (Armisen) and Rosie Perez (Poehler) to wax poetic about the end of Yankee Stadium (final baseball game is Sunday).

Time for one final sketch, and no surprises in that it’s a weird one. Wilson asks Franco for his autograph in the dressing room to set up a confrontation with Willem Dafoe (Hader), who wants him to kill…Andy Samberg? It’s all, flippity, floppity, laters, guys.

Come back next week for another all-new episode, with Anna Faris hosting! 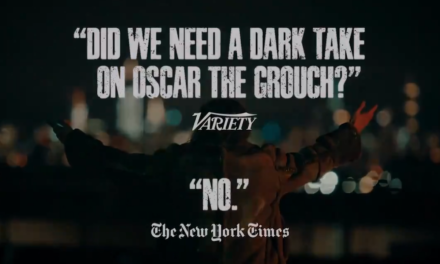 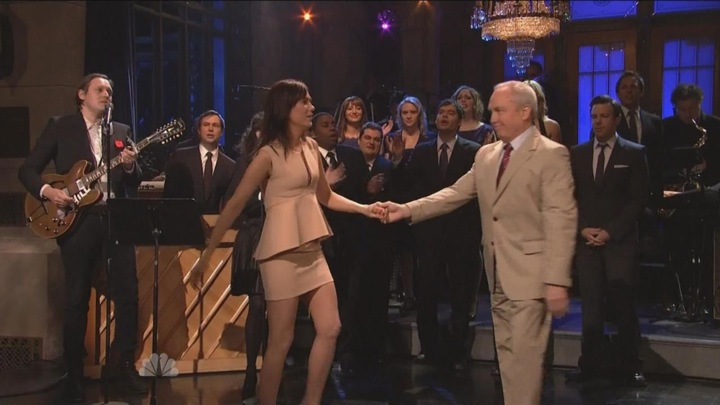