And now, finally The Final 5 cylons, er, comedians in this seventh season of Last Comic Standing will be revealed and perform for your votes and $250,000 in cash and prizes from NBC. Oh, and almost just as importantly, as host Craig Robinson says up front, there's also the "Last Comic" theater tour.

Oh, we're going to find out right away. Jonathan Thymius is your and our sixth-place finisher.

They get to be on tour together "for the next 297 days," Robinson says. Wow. Just wow. Congrats, fellas! And by the way, for anyone who asked me before the season started (including at least one of the finalists),I pretty much nailed it on the head. Enough about me. It's about these five guys. Now time to go for the big prize… First up is Roy Wood Jr., who gets a full refresher video for us to see glimpses of his journey from the first audition to the finals. Fun fact: He was arrested at 19, and discovered comedy as a coping mechanism. That was 1998. This is tonight. And tonight, Wood also opens up about how excited his drunk uncle is, even though he keeps plugging the wrong NBC show. He says Mississippi residents think everyone hates black people, which, well, Obama? Hey, look, Ryan Hamilton is in the audience smiling and clapping. Not because he likes or dislikes black people, but because he likes this black person, or because the director told the feed to switch to that camera operator. Most likely that last one. Meanwhile, Wood jokes about how he is not going to remember his married friend's dumb lie about hanging out in Puaberto Rico two years ago. And he closes with a bit about women trying to catch their men in the act. Judges? Andy Kindler says Wood keeps getting better and better, and tags his punchline about wristbands. Natasha Leggero tells him to stay single so he can wind up with a hot chick when he wins. Greg Giraldo also congratulates Wood. Looking good for Mr. Wood. But there are still four more comics to compete for your attention and affection.

Tommy Johnagin tells us he knew he wanted to be a comedian since he was a kid, and that his father has been supportive of him along the way. He's going back to the deep blue shirt with tie combo, we see, and lets us know he had a redneck uncle who stole a porta-potty. The dumbest thing he did, however, was visit a gynecologist for a sports physical, and he tells us all about that, which went on much longer than you would think something like that might happen in real life. There's also the time he hit a deer, and the woman sitting in his car yelled "Deer!" Solid stuff. Ixnay on the sweaty pits. Leggero says nice things about him finding jokes inside the jokes, and there goes your theory about her hating him. Giraldo calls him "a great comedian." Kindler says he cannot vote because he has a thermal fax machine, so instead, he'll make T-shirts for Johnagin to sell as merch?

Oh, hello adorable woman in the Lowe's commercial who looks even more adorable in the UCB Theatre basement all this past weekend during the Del Close Marathon. Wait. What?

Back on the TV show, Myq Kaplan is up next. Giraldo notes that Kaplan is not only getting better and better, but also getting lots of applause breaks, which is generally a sign of someone getting better and better in the audience's good graces, which also is generally a good sign if you need that audience to vote for you to win a televised contest. And the audience already is giving him a lengthy applause break when he takes the stage. Kaplan lets us know he's not Johnagin because he gets hateful anti-Semetic emails. As for the jokey jokes, he fills us in on how bigots are confusing when they talk about gay marriage, as well as other moments of social progress. Women are seen smiling and applauding even when he jokes about women voting ridiculously. Also: "Street vaginas." It's the new slang term. Pick it up. Take it with you. Share it with your friends. And thank Kaplan for it. Giraldo acknowledges that all of the finalists are funny so don't expect the judges to say anything bad. Kindler won the pool on whether he is Jewish, and "hooray to your thought process." Leggero says equal rights means she has to work on the show, too, doesn't work suck? Not if we're getting paid. Would you like Kaplan to get paid?

Up fourth is Felipe Esparza, who says he grew up in a place where people don't dream of success (sympathy vote or human-interest success story?). Says "I want to die with a microphone in my hand," which means perhaps electrocution, or heart attack, or hit by a blunt object, perhaps a microphone. Onstage, meanwhile, Esparza says he loves his dad because he changed household items, such as using the oven knob on the TV, like his own version of MacGyver. We also learn that in his house, they cook everything with lard. Which made kickball difficult, because he was already having a heart attack at 12. So maybe heart attack for the death. Also, he says his brother came out as homosexual, which leads to a pretty easy homophobic joke when he gave his father the Heimlich. Apparently, his brother is good looking and could do much better and more with his superpowers. "Unlike Carlos Mencia, who is from Australia, you are the real deal," Kindler tells him. Giraldo calls him his favorite "Mexican Amish" comedian.

We have one finalist left, and his name is Mike DeStefano. Look at him pet his puppy. Look at him hug other comedians who didn't make it this far. Look at him with his mother. See, he's not such a tough guy! He lets us know he went to Catholic school, which is why he is Buddhist now. He also gets in a dig about Mel Gibson when he talks about "bad advertising for Jesus." Then he jokes about finding $20 on the sidewalk, right near a homeless guy. That's a teachable moment. He also learned tough-guy things from his uncle — that's three of the five finalists with jokes about uncles, by the way, in case you were counting, three is a trend! Another tough guy moment: Calling out black guys for not shooting accurately, like Italians do. And more tough guy stuff to close it out. Leggero tries being mean to boost the ratings but doesn't commit. Giraldo says great set. Kindler says he doesn't have the balls to say the material DeStefano has in his arsenal.

After the break, a guest set from Ron White, and then it's time to vote! White brought his glass of scotch and cigar, and he jokes about Last Comic Standing not being a drinking contest. "Then why'd you call it Last Comic Standing?!" Which leads into his story about breaking one of his teeth at The Mirage in Vegas in an alcohol pool-related accident.

I know I've written and said this several times before, but a five-way final vote, with no majority needed, really makes picking a winner so unpredictable. I suppose it's like picking the winner in other awards, though, such as the Oscars, Emmys, Grammys…you can win with only 25-30 percent of the people thinking your best since the rest of the vote is split four other ways, but then again, perhaps one person is so dominant that there's no question who would win. For this show, this season, I'm not sure you can say that one of these five is demonstrably way and ahead of the other four. Each has his own strengths and demographic appeal. I'll be more than a little curious to see whom you voted for next week!

Sneak some peeks at Roseanne’s Nuts, premiering July 13 on Lifetime 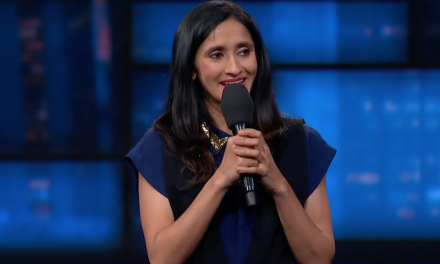 Aparna Nancherla on The Late Show with Stephen Colbert