Air America may have declared bankruptcy this week, but that wasn’t my first question for former morning radio guy (and always bitingly funny) Marc Maron, who comes back to Boston (well, Somerville) for shows tonight and tomorrow at Jimmy Tingle’s place.

No, my first question was about his current effort to upload all 36(!) clips of his Conan appearances onto his MySpace site. "I’m glad that those are working," Maron told me. "I just learned how to do this stuff. I’m stupid with it. But I got this good machine…like most people, when you buy toys you don’t read the directions. You just want to use it…it’s ridiculous when you walk into the Apple store and ask them, ‘How do you turn this on?’" He said YouTube was giving him some issues, since all of the Conan appearances have NBC copyrights.

But about Air America. "It was all a very convoluted thing at the time. I was being pushed out by this CEO who didn’t like me." A backlash against the CEO led to Maron’s L.A. radio show, which Air America picked up, but that also ended over the summer. "It was just a long, harrowing experience," he said. "I plan to get back on the air somehow or another. I’m a little spoiled. I don’t want to sit out in my garage and do a podcast. I’ve looked into streaming. You may be able to do it cheaply, but to do quality…would be a lot of production and time. I’d rather do that with a real station with some momentum behind me. I like it. Like doing it. I like the format." And lots of other funny people still want to do radio, which prompts me to mention recent radio turns by David Lee Roth and Whoopi Goldberg, among others. "All the radio guys know what the score is. If you have a drivetime radio show and you’re breaking in a new show, if it’s a new guy and a new crew…It’s an intimate medium. You’re sitting in your car with these people (who have) self-centered egos…most people are like that. But it’s going to take a year and a half to two years to build an audience. That’s just the reality." Maron notes how Howard Stern had decades of training and people literally grew up listening to him, so putting anyone in to try to replace that would take time. "No one wants to take the time anymore. That’s the problem with this DIY culture…I’ve sat across from executives…I’ve been doing this for 25 years, but they say to me, 90-second clips, that’s where it’s at!?"

Maron also just scheduled another Letterman appearance, taping it Oct. 30 to air Nov. 3, and already has taped a Comedy Central Presents half-hour, which he said went "great." "I was overwhelmed with goodness," he said. "I had a lot of fans from the radio show. People were excited to be there. I’ve turned some corner in my attitude toward comedy. I really like doing it these days. It used to be a weird almost battle for me, to find out how I was going to engage with the audience."

The new movie Man of the Year actually has a comic who’s so engaging he becomes president. Your thoughts? "The bottom line is, comics are fairly selfish animals. I don’t know that that is really what we need. For political leaders or legislators, what you need, unfortunately, is a fairly selfless person who isn’t charismatic but has his heart in the system. That requires a type of diligence and patience that I haven’t known a lot of show-business types to have on purpose….I think people like Bill Maher or Jon Stewart are important in making people see the hypocrisy, but eventually people need a leader. It’ll be interesting to see what happens with (Al) Franken in Minnesota. He has surrendered part of his funny to be a wonky person."

He said looking back on his Conan appearances, he didn’t realize how many he had done. "It’s weird to see the ones that are weak, the ones that are OK. It’s nice to see I’m fairly consistent to how I approach things, that my personality is definitely tangible." He said the show allowed him to test out lots of material. "A lot of jokes I did weren’t fully formed yet. That’s one of the benefits to doing panel."

He also got to see how he looked over the years. "I wanted to look good. I’ve given up on that s— now. The one thing I know: I’m closer in appearance now to when I started. I went through a bunch of haircuts to try to fit in. I’ve made some bad mistakes. Like my Beatles haircut and nehru jacket. We actually made fun of that the next time I was on."

He lives in Los Angeles, where he has lived before after stints in New York and Boston. "It definitely has been demystified for me. It held a lot of mystical and strange power. It took me a long time to understand that show business was a business and you had to engage in the business. They weren’t just going to come and pick you up and take you places. It took a while to realize that Hollywood wasn’t my parents." He just wanted to do the TV stuff other comics did. "I always thought if I was a great comic, everything would just fall in line…I’m still in a marginalized level of fame or recognition. I’m not bitter about it." Unless you consider the fact that almost everyone in L.A. considers him or herself a comedian, no matter how much credibility they have. "It can be disheartening when you’re at Kinko’s and someone says, ‘Are you a comic?’ And the guy behind the counter says, ‘I’m a comic, too.’ No. No, you’re not. You’re not a comic."

Last time I saw Maron in Boston was almost a year ago, when he dropped by the Comedy Studio right before his Air America depature. "I rarely go back to Boston. I spent a lot of time in Boston, though. It’s really where I started doing comedy. College. Drinking and running around. But I don’t go back very often. Kenmore Square is gone. It’s like the heart has been ripped out of you…My mind always goes back to it. That Comedy Studio’s pretty good…I used to live in Somerville, like literally across the street (from Tingle’s venue). I used to live in an attic that was painted blue on Cottage Avenue…with eight other college loafers and musicians and freaks of one kind or another."

People talk about Bostonians and Boston comics being bitter. Not Maron. "I’ve done a lot of exploration of bitterness. It’s amplified self-pity. That’s all bitterness is. To bring it public, to be bitter is to really stand in front of people say f— you, I deserve this. It’s not an attractive position." Do you deserve it? "The romanticization of bitterness is a dead-end street. But good ol’ anger. Justified anger. That’s something you can take to the bank." 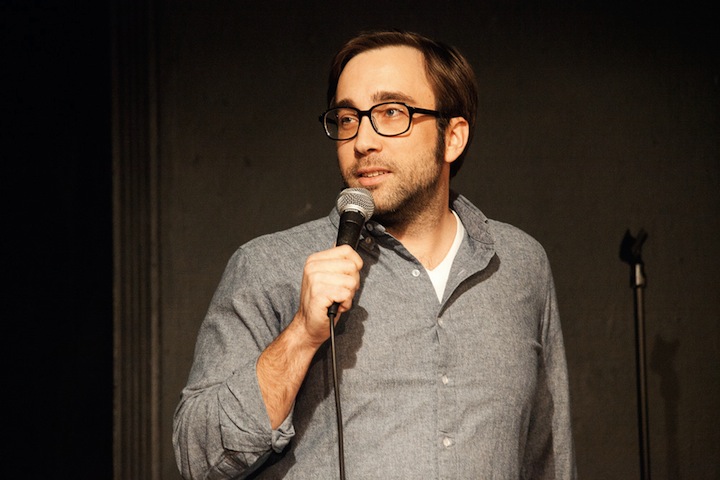 An Open Letter From a Decent, White Male Comic, by Jim Tews