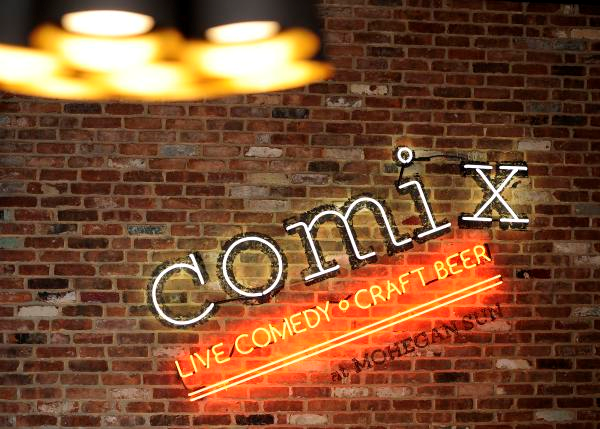 At the beginning of 2015, Amy Schumer made no secret of her dislike of Comix at Foxwoods when she guested on Brian Koppleman’s “The Moment” podcast.

Were the folks at Comix and rival resort casino Mohegan Sun listening?

They announced a new partnership today that’ll find Comix cashing in its chips at Foxwoods after the first weekend in October, and launching a brand-new comedy club inside Mohegan Sun the following Wednesday, Oct. 7, 2015.

COMIX Mohegan Sun will host live stand-up shows Wednesday-Sunday in a 325-seat club designed specifically and exclusively for comedy. It’s an 8,000-square-foot facility with a craft beer bar inside Mohegan Sun’s Casino of the Earth.

“We’re thrilled to become a part of Mohegan Sun. We’re looking forward to bringing more programming of laughs and the best live comedy experience to New England’s most exciting gaming and entertainment destination,” said Michael Brauth, one of COMIX’s partners.

Fellow COMIX partner Marc Wiesenthal added: “Our new location and partnership with Mohegan Sun allows us to continue to present the best comedy talent from New York, Los Angeles and nationwide to an audience that appreciates and deserves great entertainment. We also look forward to hosting the biggest names in comedy in both the Mohegan Sun Arena and the Uncas Ballroom.”

“We are extremely excited to be partnering with COMIX, an alignment of two of the strongest names in the entertainment industry,” said Bobby Soper, CEO for the Mohegan Tribal Gaming Authority. “With the addition of the new comedy club, Mohegan Sun will now feature one of the best trios of entertainment venues all under one roof and within 100 yards of each other. It will be hard to find another destination where in a given night, it’s possible for an act like The Zac Brown Band to be playing The Wolf Den, Justin Timberlake on stage in The Arena and Lenny Clarke delivering standup at COMIX.”

In addition to announcing the new partnership with Mohegan Sun, COMIX announced the opening slate of club acts for October and November including: Julian McCullough, Alonzo Bodden, Lenny Clarke, Jamie Kennedy and Rod Man. Tickets to all performances and details are available by visiting www.COMIXcomedy.com or by calling 860-862-7000.

Foxwoods, meanwhile, still will feature comedy at its Fox and Grand theaters.

Comedy Gives Back happening LIVE now and through Thursday

Inside Joke with Zach Galifianakis