Ruhbin Mehta died earlier this week, apparently from cardiac arrest. He was a comedian from Toronto who lived in New York City for the past several years, but continued to love the Maple Leafs more than anything except perhaps stand-up comedy and most definitely the possibility of a good night’s sleep.

That’s because Mehta suffered from insomnia. I know that because he followed me on Twitter and that’s what occupied his shared thoughts with us, although he hadn’t Tweeted in the month before he died. I remember seeing him in a funny short video my former roommate filmed and edited called “Jump.” It’s included down below.

But unless you lived in and around the indie bar shows of NYC, then you may never have known him. So here are words from the comedians who did know him.

Lance Weiss posted a couple of photos from hell gigs he and Mehta had performed at a few years ago. “Our buddy Ruhbin Mehta passed away recently. It’s super sad and everyone who knew him, knew he was super nice and super funny.” At a nursing home gig in New Jersey, Lance recalled: “Everyone was like 80 years old plus. I performed and lasted I think 6 minutes before the producer told me to get off stage. I was eating it so hard. Ruhbin I think lasted about 11 minutes or so, which is an insane amount of time to do when noone can even hear you. At one point, an audience member got up with their walker and walked out, which literally took about 2-3 mins for them to get across the stage. I was crying laughing so hard. It honestly was some of the hardest I had laughed that year. We retold the story over and over.”

Ted Alexandro: “My heart is very heavy with the news of the passing of Ruhbin Mehta. He was a gentle, sweet, smart, funny man. I will miss him. I’ll miss performing with him and I’ll miss being around his big, warm, kind spirit. Eternal peace & love, my friend.”

Mike Lawrence: “R.I.P. to Ruhbin Mehta, a great, funny guy who I took the train with and talked Simpsons every Tuesday night after mics.”

Andrew Singer (who supplied the photo above): “Ruhbin Mehta was the headliner for my First-Timer’s Show a year ago… ‪#‎RIP”

Jeff Cerulli: “Ruhbin Mehta was a really sweet guy. He was legit funny (ex oprah bit) but what i liked about Ruhbin was that you could talk to him. Sometimes you talk to comics and it is all promotion blah blah blah i am doing this i am not a real person but anyone who ever talked to Ruhbin would never feel that way about him.”

Jordan Carlos: “Just learned that I lost a good friend in comedy, Ruhbin Mehta. He was such a great guy. I loved doing shows with him and running into him in the city when we’d just sit on a random park bench and I would become invariably late for something because this wonderful guy and I were just shooting the breeze. We’d talk and I’d play with the many dogs he walked around the city. He was such a pleasant person, a tight joke writer and I am pained to see him go. We love you, Ruhbin. RIP.”

Sergio Chicon: “We lost a good one. May your soul rest in eternal peace. I’m going to miss you, Ruhbin Mehta. I could hear your voice now. You loved hockey like I love boxing. You were always sweet and pleasant. I’ve known you since I started stand up. You were always funny and a compete professional, warm and personable. Much love to you, man. Peace.” 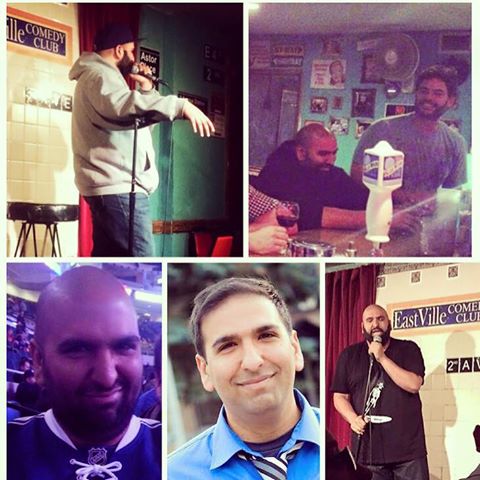 Carolina Hidalgo: “That Oprah joke is still one of my favorites. RIP Ruhbin Mehta. You were really good.”

Here is Ruhbin in a sketch video with Stone and Stone from 2012:

He also shows up briefly in the end of this video that made the rounds a few years ago:

Before then, in 2010, he made this intro video for himself for the live showcase, Anecdotal Evidence:

EastVille Comedy Club: “A friend, a talent, and we loved him. Ruhbin Mehta will be missed more than words.”

A friend, a talent, and we loved him. Ruhbin Mehta will be missed more than words.

Comedians will gather to remember Mehta at 5 p.m. Sunday, Aug. 23, 2015, at EastVille Comedy Club. “There will be stories, laughs, tears, and probably hugs. He was a real sweetheart of a human being,” said James Mattern. “A wonderful comic and a great friend. He will be missed more than you’ll ever know. Feel free to come show your love.” Amy Schumer defends her comedy credibility: “On my life, I have never and would never steal a joke”

Let Bill Burr take you on a driving tour of L.A.