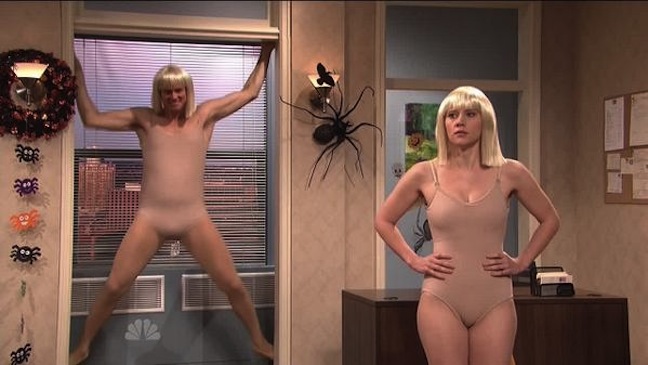 Jim Carrey is back 20 years later with the sequel to Dumb and Dumber this fall, so is 52 the new 22? Can you handle his physical comedy better now that distance has made your hearts grow fonder for it? Can I come up with another mixed metaphor for how tempered my enthusiasm is, lest my comedy heart get broken? Alas, we’re all getting a little too far ahead of ourselves. That’s not even the most pressing thing happening in New York City, America or the world right now.

So first, a message about Ebola. Let’s start the recap! My notes in italics.

Ebola Czar Cold Open: President Obama (Jay Pharoah), Ebola czar Ron Klain (Taran Killam) and Rev. Al Sharpton (Kenan Thompson) address Ebola concerns during a press conference. You guys, remember how badly the Obama Administration has handled other projects, terrorists and whatnot? Oh, not many Republicans watching SNL? Well, we’ll go ahead with this sketch about how the new Ebola “Czar” doesn’t have a lot of medical expertise in his background. I bet this sketch killed 100 percent of the time at the table read, but only 50 percent of the time in front of an audience is only half-good.

Jim Carrey Halloween Monologue: Jim Carrey debuts his Halloween costume, Helvis, and performs an original song about loving pecan pie. And here’s our host, Jim Carrey. Or is it Andy Kaufman? So difficult to know when Carrey does an Elvis impersonation since assuming the role of Kaufman in Man on the Moon, but this isn’t Elvis at all. It’s Helvis. As in Elvis in Hell. Because it’s the Halloween episode. And when peanut butter and banana sandwiches are eaten and dessert is needed, it’s time to sing for your pecan pie? I cannot think of pecan pie without thinking of When Harry Met Sally debating impersonations and pronunciations of pecan pie.

Lincoln Ad: Fake ad in the fake ad slot! Jim Carrey parodies the Matthew McConaughey Lincoln commercial. Why do you buy a Lincoln? “You do it because you love it. Or ’cause you’re an Uber driver.”

(Note/Spoiler Alert: All three Lincoln ads are shown as one clip above)

Carrey Family Reunion: Jim Carrey is reunited with relatives (Taran Killam, Kyle Mooney, Beck Bennett, Vanessa Bayer, Bobby Moynihan) who share his similar manner of speaking. Guest appearance by Jeff Daniels. Jim Carrey as himself in a bar with a lot of Jim Carrey impersonators — or is it a family reunion? Alrighty then! Taran Killam’s is pretty good as Jay Carrey. Kyle Mooney is Percy Carrey. John and Rita Pat Carrey (Beck Bennett and Vanessa Bayer) as the Ace Venturas. Jay Pharoah as The Cable Guy. Cecily Strong is his aunt as the Fire Inspector Bill character. Bobby Moynihan as The Mask. BUT SURPRISE! It’s not a true movie promo without the true movie guy, and here’s Jeff Daniels as Grandpa Lloyd, not Harry. To remind us that Dumb and Dumberer To is coming to a movie theater near you in November.

Lincoln Ad: Second fake Lincoln ad. This is great free advertising for Lincoln. “Whose kids are these? And how’d they get in my Lincoln?”

Graveyard Song: The spooky residents of a cemetery attempt to frighten a pair of visitors (Sasheer Zamata, Pete Davidson) but keep getting interrupted by ghosts Paul and Phil (Jim Carrey, Taran Killam). An All Hallow’s Eve musical number, with Moynihan and McKinnon as gravestones, Thompson as a tree and Pharoah as the Grim Reaper identifying their intentions in song, except the song turns out to be all about friendly ghosts Paul and Phil. Which one is Paul and who is Phil? Just goofy enough to hold your interest to see what comes next. What if nothing else comes next, though? Better goof it up even more, then!

Another fake ad. Thompson doing an Allstate ad, but no, he’s run over by Carrey in a Lincoln. These are the most hybridy hybrid ads ever, especially since Lincoln is active on Twitter and promoting Twitter feeds as SNL is on the air.

Ladies and gentlemen, Iggy Azalea. Is it still Fancy if Charli XCX isn’t there? Is this all real? Is her booty even real? Is she really Australian even? Questioning everything I know about everything. Well, this is in fact, Rita Ora. For a quick segue into Black Widow Baby. Medley!

Weekend Update: 10-25-14: Colin Jost and Michael Che tackle the week’s biggest news, including Ebola in New York, Peyton Manning breaking Brett Favre’s record, Lay’s new wasabi ginger potato chip flavor and the cancelation of TLC’s Here Comes Honey Boo Boo. You can see Jost and Che are warming up to their gig and place behind the desk, but it still needs something — better when they break out from the format for a segment dialoguing together.

Weekend Update: Drunk Uncle on Halloween: Drunk Uncle (Bobby Moynihan) shares his frustrations with Halloween and trick-or-treating. When he slides in from the other side of the set, it’s only for a moment of awkward racial tension with Che. “Oh, sorry. Fifth floor, please.” Swivels chair over to Colin Jost’s side of the desk. “Yeah, this feels better.” Does it, though?

Secret Billionaire: One of these bachelors (Jim Carrey) is not like the others (Bobby Moynihan, Beck Bennett, Jay Pharoah) on dating show Secret Billionaire. Taran Killam hosts, with Cecily Strong as Stacy, the lady looking for love from four bachelors, only one of whom is an actual billionaire. It’s just people standing around, reading cue cards while standing. No action. Only Carrey’s aging wheelchair-bound mechanical-handed facial and accent characterization sells it. Because of course, he’s the bachelor billionaire. And his stories about his mechanical hand and his room full of Dennises conjures up interesting images.

Ghost Chasers: A team of paranormal researchers (Taran Killam, Kyle Mooney, Sasheer Zamata), a local historian (Vanessa Bayer) and a skeptic (Leslie Jones) visit a haunted mansion. In this video, Killam again is our front man, hosting a spoof on ghost-chasing shows called Ghosts: Fact or Fiction? with his team now featuring a resident skeptic Ronda Banks (Leslie Jones), who’s not so skeptical. In fact, she’s more scared than anyone. Jones is proving both here and in her cameo to start the Carrey Family Reunion sketch why she belongs in the cast — much-needed energy.

High School: After the zombie apocalypse hits, one loving dad (Jim Carrey) has a hard time believing his son (Pete Davidson) has been infected. When Carrey shows up with his zombie son 10 days after the zombie apocalypse attached on a stick, he tries to pass it off as artistic or ADHD to convince the others (Mooney, Bennett, Thompson and Strong) he’s safe. They give Thompson the audience surrogate’s line: “This is just straight-up stupid!”

Halloween Party: When two people (Jim Carrey, Kate McKinnon) both dress as the dancer from Sia’s “Chandelier” music video, the only way to decide who wore it better is with a dance-off. Guest appearances by Lorne Michaels and Iggy Azalea. Most fun sketch of the evening, so it’s surprising we have to wait this late in the evening for it. Must have been a scheduling/costuming issue, figuring you needed to see the Carrey impersonations and movie tie-in early, and you couldn’t get all of the other cast members — including Carrey — in and out of costume either before or after the monologue. At any rate. Funny stuff even in the set-up to the DANCE-OFF, with office boss Vanessa Bayer guessing Kyle Mooney is dressed as a butt or a vagina. Nope. He’s just a peach. Or that Aidy Bryant’s non-costume must have been a costume. It’s all setting up the real gem, which was the dance-off between Carrey and McKinnon. Dancing through the audience, past Lorne Michaels (still odd to hear the audience react wildly to seeing Lorne, as if he’s a star himself), past the sets from earlier in the evening, past Iggy Azalea and back to the scene proper. Just a joy to watch.

Once again, Iggy Azalea. This is her new single. “Beg For It.” That other lady is Mo.

That’s it. Goodnight, everybody! Happy Halloween! See you in November with Chris Rock and Prince. 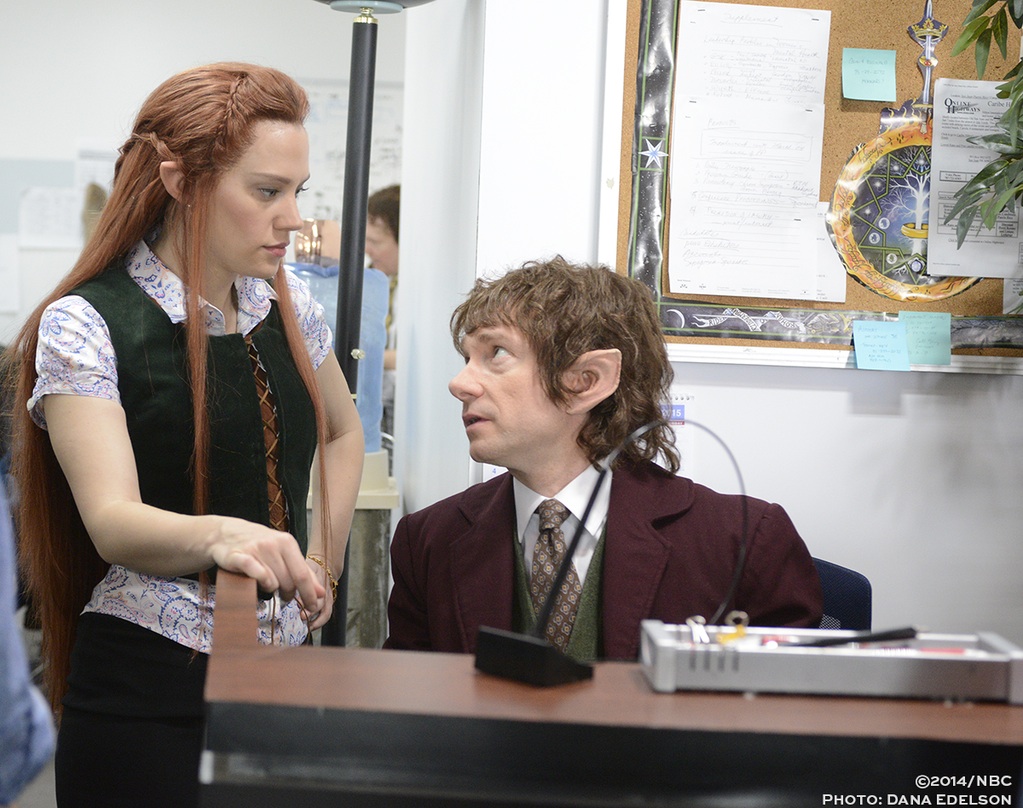