Long recovery ahead for Tracy Morgan, Ardie Fuqua and Jeffrey Millea; driver in Turnpike crash who rear-ended them charged with death by auto

Any other night, seeing Dave Chappelle and Chris Rock perform at the same comedy club would be the kind of occasion to become entertainment’s top headline and even conjure up a GQ article a year later just to reminisce.

But Saturday night wasn’t any other night in comedy. Or at The Comedy Cellar.

Not 24 hours after a fatal car crash that killed James “Jimmy Mack” McNair and critically wounded comedians Tracy Morgan and Ardie Fuqua, plus Morgan’s assistant, Jeffrey Millea, the Cellar in New York City’s Greenwich Village provided a safe harbor not just for greats such as Chappelle and Rock to test out their latest material, but also to commiserate with other comedians over the tragic events that unfolded a night earlier along the New Jersey Turnpike.

“It’s hard to think of jokes because I’m preoccupied,” Chappelle said, shortly after taking the Cellar stage in the wee hours Sunday morning, telling the crowd he fully expected to see Fuqua greeting him when he pulled up to the club Saturday night.

“I think we’re all eagerly anticipating the ovation he gets when he walks back up on this stage, and he’s healthy, and he’s well, and he does one more of them shitty sets he does. We really — I believe that he’s gonna be alright. But, I don’t know. I know everything that other people know.”

What we knew this morning was little more than we knew Sunday morning: Morgan, the 45-year-old Saturday Night Live and 30 Rock star, remained in critical condition at Robert Wood Johnson University in New Brunswick, N.J. As did his assistant, Millea, 36, of Shelton, Conn.; and Morgan’s 43-year-old opening act, Fuqua. McNair, known onstage as “Jimmy Mack” or “Uncle Jimmy Mack,” died at the scene. McNair was 63, and a mentor not only to Morgan but many younger people in NYC and Peekskill, N.Y., where McNair lived and worked. Another of Morgan’s touring comedians, Harris Stanton, was treated and released on Saturday with a broken wrist. The driver of Morgan’s Mercedes Sprinter limo van, Tyrone Gale, and Gale’s colleague who sat in the front passenger seat, were not hospitalized.

Fuqua’s mother, Doris, a retired Jersey City pubic school teacher who lives a few doors down from her son, told The Jersey Journal on Sunday that her son is in critical but stable condition. “He has a broken leg and a few other things,” Doris Fuqua said.

Morgan’s publicist, Lewis Kay, released a statement Sunday saying: “While Tracy remains in critical condition, he has been more responsive today, which is an incredibly encouraging sign. He sustained a number of injuries including a broken leg, a broken femur, a broken nose and several broken ribs. He had surgery earlier today on his leg. We expect him to remain in the hospital for several weeks. His family is tremendously overwhelmed and appreciative of the outpouring of love and support from his fans.”

Kay had no update on that status for The Comic’s Comic earlier today.

UPDATED 4:22 p.m Monday with a new statement, regarding Morgan: “Tracy remains in critical but stable condition.  His fiancée Megan is by his side.  The concern for his well-being has been overwhelming, but Megan is respectfully asking that the media await official word through these channels before speculating (mostly inaccurately) on his condition. Rumors about amputating his leg are completely fabricated. As we shared yesterday, Tracy had surgery on his broken leg. We are working closely with the incredible staff at Robert Wood Johnson University Hospital to share information when it is available. This recovery will be arduous and we hope that you can be patient during this difficult time. Thank you.”

Meanwhile, Kevin Roper, the 35-year-old Georgia man who rear-ended the comedians’ limo with his Walmart tractor-trailer, was supposed to appear in Middlesex County Court today to face one count of death by auto and four counts of assault by auto. Roper’s bail was set at $50,000, and his initial appearance postponed to Wednesday.

His criminal complaint alleges Roper hadn’t slept at all in the 24 hours before the crash — triggering “Maggie’s Law,” enacted into New Jersey law in 2003, which made it a crime to cause a fatal accident while deprived of sleep. The complaint alleges Roper failed to stop in time for slower-moving traffic ahead of him on the Turnpike and swerved in an attempt to avoid hitting anyone. In doing so, however, he plowed into the back of the Mercedes limo carrying the comedians, and overturned it.

Bill Simon, president and CEO of Walmart U.S., even released a statement: “This is a tragedy, and we are profoundly sorry that one of our trucks was involved. The facts are continuing to unfold. If it’s determined that our truck caused the accident, Walmart will take full responsibility.”

From Good Morning America this morning:

Here is a noon-time report from my friends at CBS 2 in New York:

While Morgan is undoubtedly garnering all of the headlines, and McNair’s family our condolences, the New York City comedy community and even the most casual comedy fans in the city remain in shock over Fuqua.

Perhaps because Fuqua — such an engaging presence and man-about-town — made sure every single comedian and comedy fan knew him (and took a picture with him). He’s without a doubt the most energetic and interactive comedy-club host in the city.

Just a day before the crash, Fuqua was reminding us that his hustle was taking him into a Comedy Central pilot with Big Jay Oakerson for Oakerson’s crowd work showcase. I’d attended their trial run for that in April at The Village Underground, then called “What’s Your F#@king Deal?!” where Fuqua roamed about the audience with a second mic while Oakerson hosted. Fuqua approached me toward the end of the show and made a playfully big deal about my bringing a date to it.

Everyone has an Ardie Fuqua story, though.

Here, Fuqua and Morgan shared a happy moment onstage in Seattle a week ago Saturday. On May 26, he posted a photo of his 19-year-old daughter, Krizya, onstage with him at Caroline’s on Broadway after he’d opened for Morgan there. Fuqua had lost his teenage son, dying in a freak accident two years ago. And on May 19, Ardie posted a self-portrait of himself with a lengthy caption:

“My life isn’t easy. It’s really hard and painful. I don’t sit home and cry about it tho. I just work harder. I know a lot of yall feel the same way. I won’t stop trying to make a better life for myself. I do get support from people. And I’d like to thank you for that. And hopefully my story inspires you to always stay focused no matter what the universe throws at you.”

My thoughts and prayers remain with the families of Morgan, Fuqua and Millea. May they all enjoy a full recovery. 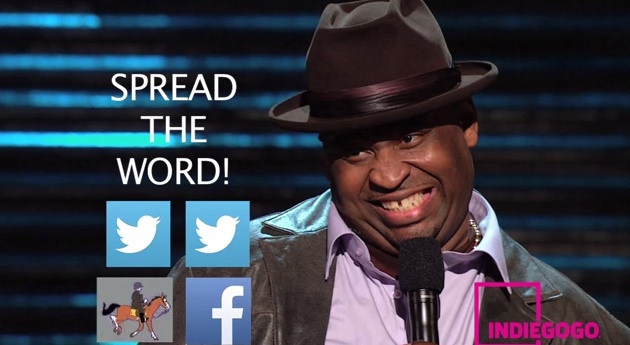