FOX hosts a comedy RIOT with host Rove McManus, via Steve Carell and a team of improvisers 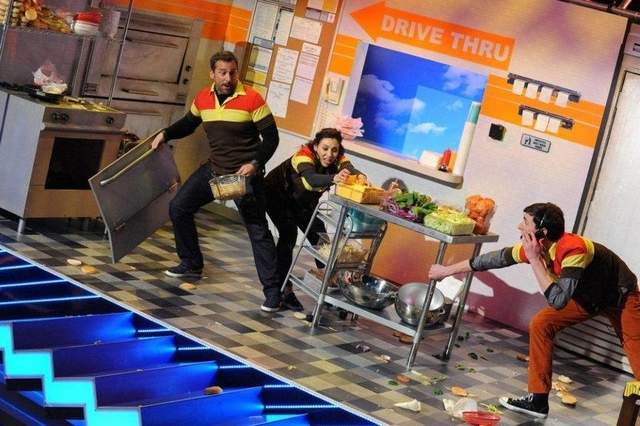 First Whose Line is it Anyway? gets a revival courtesy of The CW; then, NBC gets back into the celebrity game-show arena with Hollywood Game Night. What’s next? A full-scale RIOT?! Well, yes, tonight on FOX. That’s the name of the new limited-run summer comedy series, brought to us by Steve Carell, hosted by Rove McManus and performed by a repertory group of improv comedians alongside celebrity guests.

Or, make that a tilt.

Here’s your first look at RIOT, which debuts tonight on FOX at 9 p.m. Eastern/Pacific (8 p.m. Central/Mountain). As John Ross Bowie explains it, “It’s an unholy alliance between Whose Line Is It Anyway and a Japanese game show.” You up for that? Roll the clip!

The Comic’s Comic spoke with host Rove McManus, as well as two of the cast members — Meryl Hathaway and Rob Gleeson, pictured above onstage with Carell. 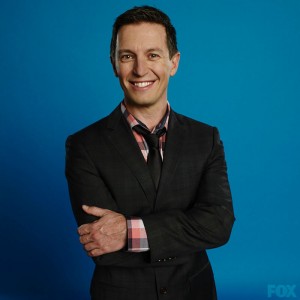 RIOT is imported and adapted from a French-based program called Anything Goes. McManus, meanwhile, was imported from Australia. He’s a very successful talk show host Down Under; in the States, you may have seen him previously in a series of “Meal or No Meal” sketches on Jay Leno’s version of The Tonight Show, although most recently, McManus appeared at the beginning of the month as a contestant himself on Comedy Central’s @midnight.

“Plus, two seasons of my Australian talk show here,” he told The Comic’s Comic. “But it was on TV Guide Network, so I don’t know how many people saw it. This is certainly my first step into the U.S. spotlight. Which is very exciting.”

He’s no stranger to comedy, though. “I started doing stand-up in 1993 in a tiny little city called Perth, Western Australia. Moved to Melbourne…from there got a talk show I did for 10 years in Australia, moved it here for two, and now I’ve got this on FOX.”

It seems like most Australian comedians I encounter in North America arrive here via a detour to the U.K. first. Not you.

“We had a really strong connection with the U.K., obviously for many years, because they kicked us out of their country,” McManus joked. He’s legit here, by the way. “Australia is my homeland but I am a U.S. resident. I have my green card and everything. Very proud to get in the express line in customs.”

It’s not an easy process, McManus said. Even though he already carried a visa to work in America. “That was about to expire,” he said. “You have to put in all of your credentials.” And then wait. And wait some more. When that paperwork is accepted, there’s more. “No, no, you’ve been approved to apply. Then you have to wait months to do the whole process again.” But now. Presto. “Now, I am quote-unquote, ‘an exceptional alien.'”

It helps to have famous friends.

Did Steve Carell vouch for you as exceptional? “I’m going to say yes just to put it out there. He’s been a great mentor and benefactor for me. We met in 2005 when he was a guest on my talk show. We hit it off,” McManus said, and Carell told him he’d make something happen for him. “I just got a call out of the blue, back in 2007. That didn’t end up happening. But we kept in touch. He said he likes me, likes what I do and would find something for me. So he’s a man of his word.”

So Carell really is as nice as everybody says he is!

“The word nice comes across as you’re not very interesting,” McManus said. “That’s how ladies describe a man they don’t want to date. He’s nice. Sweet. Loving gentleman, all those words you’d think in the modern world go with men who can’t get by, and yet, there he is.”

A great success story all around.

What about the other celebrities who join the fun — did they all have previous training or experience in improv?

“Some didn’t,” McManus said. “We had some stand-up people or actors, like Mayim Bialik, I don’t think had done any improv at all and she was terrified. So it was a nice mix of some people like Steve (Carell, at The Second City) or Cheryl Hines who had Groundlings background in improv, then other people like D.L. Hughley through his stand-up…stand-up, you learn to think on your feet, so it’s a good skill to have.”

The tilted set gets all of your visual focus.

But McManus also says to keep an eye out for a game called Bunch of Jerks, “where you have to make up a scene with harnesses and wires attached to your back that go up to the ceiling in the studio. At random intervals, people will be jerked up…it’s quite jarring to watch!”

McManus said he picks his opportunities to join in the game.

“Every once in a awhile I jump in, if I think people are struggling with a mime,” he said. “There’s a game where we have a big screen, shadow puppets, and you have to act out the title of a movie, get your guests to guess…that’s one I really enjoy. But it’s really easy for me to sit on the sidelines.”

“So I’m living every viewer’s dream, here they’re screaming at the screen, ‘Do it like this! Do it like this!’ If I feel quite evil, I’m making it more difficult.” Such is the case in another game where performers are kept in the dark, playing in a room with no artificial or natural light. “We film it with night-vision cameras,” he said. “Sometimes there might be a half-naked guy laying in a corner of the room, and I want to make sure they find him.” 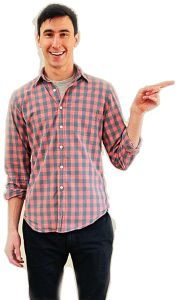 They didn’t all come from the same group or even the same theater — L.A. has several now, in addition to The Groundlings, there’s iO West, the UCB, and more smaller venues and workshops sprouting up.

“They cast a pretty wide net to the comedy communities,” Gleeson said. “They combed through all the major theaters, the Groundlings, UCB, Second City. They took anyone they could get. Established improvisers. I know so many people who went out for the show.”

The RIOT auditions were slightly different from what improvisers do when trying out for one of the theater’s house teams.

“We started with very simple scenarios that they gave us, improvised for the camera,” Hathaway said. “It was really that simple. Two minutes or less…they must have gone through a million tapes. Those of us who were called back — we were put in groups of four and we ended up playing games. We didn’t know what we were doing until we were in the room. But the process was really fun.”

Gleeson added: “The one big noticeable difference…I think I auditioned four times…Usually you get a real stage and it’s properly lit. This audition, the screen test would be a conference room and fluorescent lights and 15 suits in the room.”

“And you’re only a foot away from someone who’s deciding your fate,” Hathaway said. “I think that almost took the scariness away from the process for me. Because these people were just people and I can see that they’re laughing. Honestly, I was more nervous thinking it was going to be one of those comedy auditions where people don’t laugh.”

Hathaway and Gleeson said they may have known a few of their cast mates before through the various theaters and shows. “I would say we all bonded really quickly,” Gleeson said. “Once they had the cast, we workshopped some of the games. How could this game be better? How could it be funnier? Where do we fit the celebrity guest in?”

Preparing for the tilted stage, however, wasn’t as easy.

“We just have to get on it and see what we can do,” Hathaway said. “There’s no quad prepping.”

“The first time, it’s surprisingly steep and exhausting,” Gleeson said. “To play a scene straight and just talking, to continue doing it while somebody slipped and fell to the bottom of the stage.”

Anything else we should know? 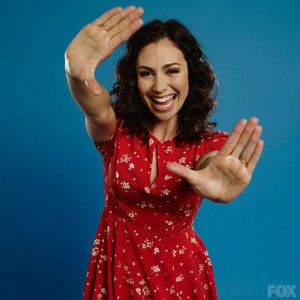 Gleeson: “No one has really asked about Rove, and he is awesome.” Hathaway added: “He was fun to be around.”

Gleeson: “He sees stuff in the game and calls stuff out. He’s so good.”

Hathaway: “And he’s got an accent. That’s always fun. And he ate with us sometimes, which is cool.”

“I assume it,” Gleeson said.

“Yeah, I will, for sure,” Hathaway said.

Gleeson: “I don’t know if it’s an organized thing, but I expect I’ll be Tweeting when it airs and taking cheap shots at my competitors.”

RIOT debuts the first of eight episodes tonight on FOX. 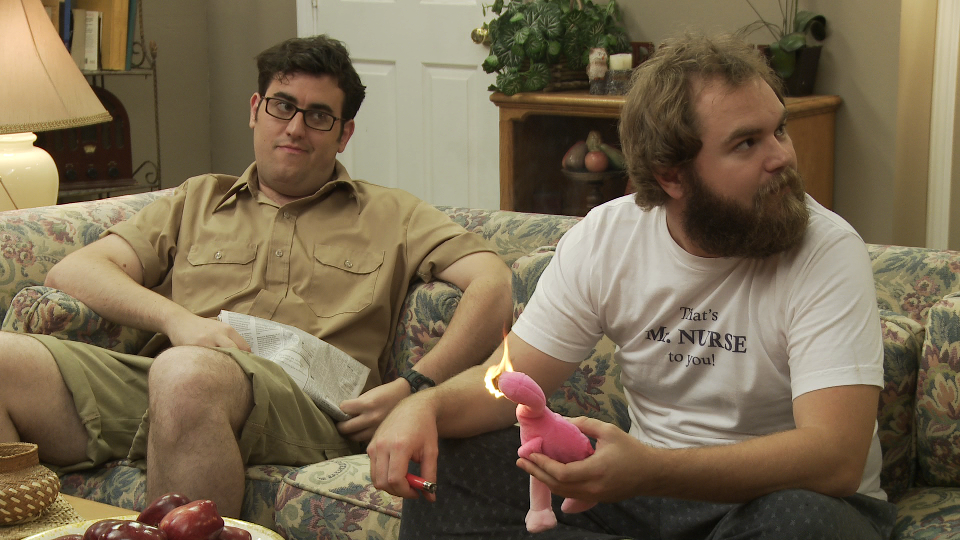 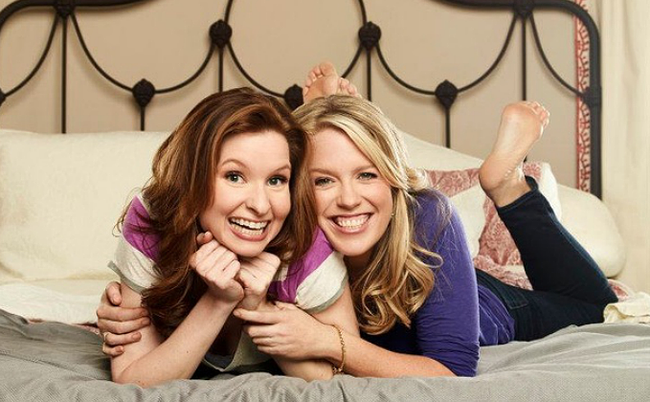