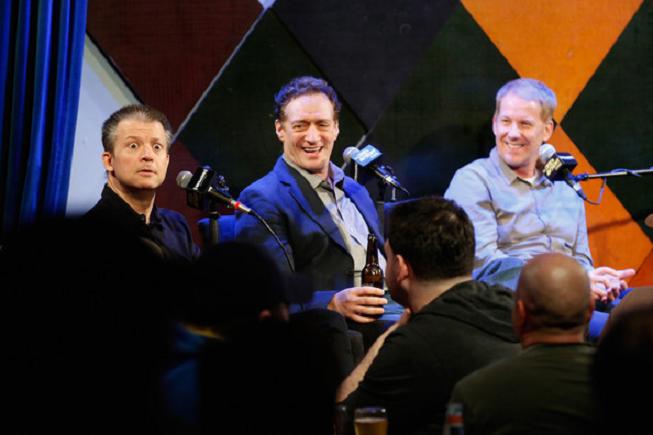 Don’t be shocked to see Jim Norton skinny and growing his hair out, as you see him shocked above in this appearance last month for the Opie & Anthony 20th anniversary interview/show for SiriusXM at Caroline’s on Broadway.

Norton will be front and center this July when he delivers the keynote address for the comedy conference at Montreal’s Just For Laughs, the biggest comedy congregation of the year.

Norton’s address will happen July 24, 2014. He joins an illustrious group of keynoters that kicked off in 2010 with Lewis Black and continued with Marc Maron, Patton Oswalt and Colin Quinn.

JFL also announced the opening slate of headliners today for the 32nd edition of the monthlong Montreal bash, which includes (deep breath!):

Many more shows will be added, per usual.

Talk of the Fest

Off-JFL in collaboration with Yahoo!

The Mighty Boosh’s psychedelic darling Noel Fielding unites the Commonwealth’s funniest people at L’Astral for The Brit-ish Show for five shows of delightfully deadpan humour from July 22-26. The Nasty Show is back at Club Soda from July 9-13 for nine shows of kill-or-be-killed comedy with Bobby Slayton, Ari Shaffir, Kurt Metzger, Montreal’s own Derek Seguin (who received a standing ovation at last year’s Whitney Cummings gala) and a slew of off-colour comics. Then at Metropolis, join Maz Jabroni, Workaholics’s Erik Griffin, Angelo Tsarouchas, Paul Varghese and more for The Ethnic Show as they bring hope for world peace by uniting comics of all races from July 17-20, and then July 22-23, 26. Back at Club Soda, Godfrey, Lynne Koplitz, Joe Matarese, John Heffron and friends make their lovelorn return to Just For Laughs from July 16-19 on the Date Night show. Then, the charismatic Dom Irrera hosts a brand new show at Club Soda, The All-Star Show from July 16-19, featuring a selection of the best acts that have ever performed at the Festival including Alonzo Bodden, Judy Gold, Ryan Hamilton and Adam Hills.

ComedyPRO Conference
Bill Burr will receive the Stand-Up Performer of the Year award. Plus a panel with Brooklyn Nine-Nine, Norton’s Keynote Address, other awards, and Andy Kindler’s annual State of the Industry Address, industry luncheons and cocktail parties. Register at comedypro.hahaha.com

Podcast recordings include Doug Loves Movies, You Made It Weird with Pete Holmes, The Smartest Man in the World Proopcast, Ari Shaffir’s Skeptic Tank and The Seánpod: with Seán Cullen.

Plus New Faces, New Faces/Unrepped and New Faces/Characters — the shows that make all the industry and comedians go battiest.