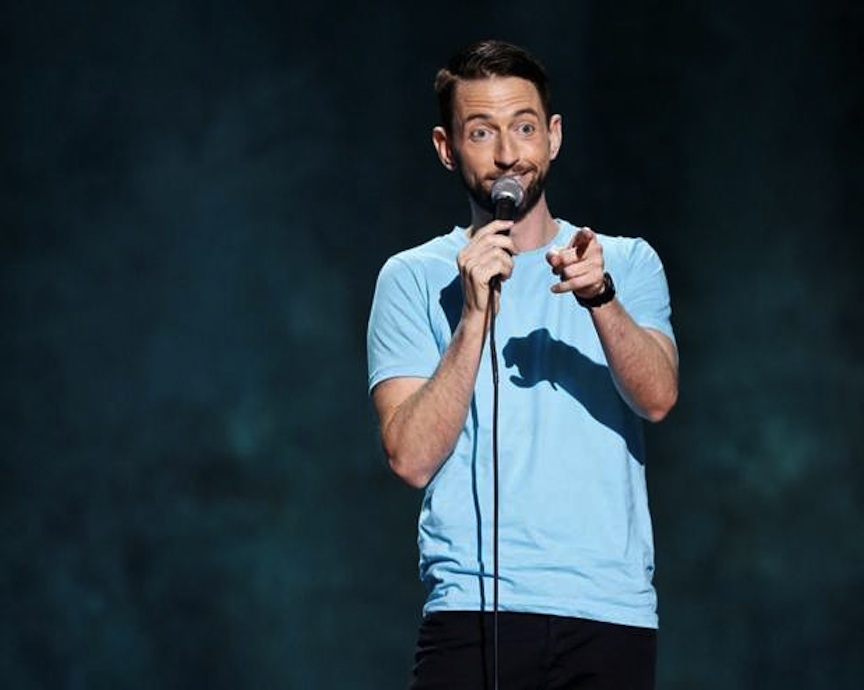 Neal Brennan‘s first one-hour stand-up special does indeed focus squarely on his relationships with “Women and Black Dudes,” but before we get to his Comedy Central broadcast — which premieres uncensored at midnight this Saturday — let’s start at the ending.

This is not a spoiler alert, insomuch as it is an awareness alert. After telling his closing joke about the origin of an infamous sexual position, Brennan trots offstage at the Civic Theater in New Orleans, where he immediately treated to as if he’d just completed a marathon. What’s the significance of that? Symbolism? Inside joke?

“That is a joke,” Brennan told The Comic’s Comic over the phone over the holidays. “Me and Mike Schur — he’s the creator of Parks and Rec, he’s the creator of Brooklyn Nine-Nine. When one of us would do a joke that fucking bombed, we would put on an imaginary marathon blanket on the other one. Like they had been through that marathon moment of bombing. And they needed fluids.”

Not that Brennan bombed in his big TV hour (released in various video formats Jan. 21, 2014). Just an idea of one more laugh to go out on.

“Well, if I’m just standing here. It’d be funny if I put the comedy tinsel on it. I forgot it was in…”

You forgot you did that?

“No. I directed it. I just haven’t seen it since July. I think I tried to cut it out but the editor was like ‘No, keep it.'”

Here’s another bit from Neal Brennan’s “Women and Black Dudes” with a little extra something in the form of animation. It’s his story of meeting President Barack Obama and bonding over Chappelle’s Show, which Brennan co-created with Dave Chappelle. Check it out.

Do you see your jokes now evolving out to more than just women and black dudes?

“I know now, none of my jokes are about black dudes. Well, maybe a couple of them are. And I do talk about girls a little bit…I think what will evolve with me is just more of my stand-up style. Because I’ve really only been doing stand-up for six-and-a-half-years. Taking that level of comfort and turning it into whatever. The length of time I’ve been doing it. The level of mastery will get better, is not there. Like (Chris) Rock always says to me, ‘I have so much muscle memory that you don’t have. As a joke writer, you’ve got like 15 years. But just in terms of being onstage, people looking at me…,” Brennan remains still a young prospect.

Do you subscribe to a theory espoused in Jerry Seinfeld’s Comedian documentary, that you’re really only as old as however many years you’ve been actively and continuously performing stand-up?

You had the chance five years ago to be head writer Jimmy Fallon on Late Night — looking back, are you glad you have this stand-up career or do you think about an alternate life path into late-night with Fallon? Or with Seth Meyers (whom you helped write the White House Correspondents Dinner speech, among other projects)?

“Well, I pursued directing The Goods and moving to L.A. It wasn’t, ‘Sorry, Jimmy, I have to hit the road.’ I was never at a crossroads.”

And no impulse to go back to New York City and work with Seth, then? (Related: Meyers and Brennan recorded a lengthy chat themselves that’s in New York mag’s Vulture)

“We never really talked about. He knows if he ever needs me, I’m there,” Brennan said.

“I don’t really want to do a job everyday. Period. That’s the bottom line. I mean, everyday. Those jobs are hard, man. Those jobs are thankless and hard and grueling as hell. And that’s if it goes well. And they’re taxing. In like you’re kind of the host’s life. You’re literally — if there’s a bullet coming, you have to jump in front of the host. And I don’t feel like doing that. I think people should get shot just like me. It’s a very enmeshed job, and it’s not something I’m dying to do.”

You’ve also been directing TV a bit in the past year, as well as pushing your own TV projects in front of the camera. Still moving forward on both of those fronts?

“I did (The) Mindy (Project) this year. And (Inside Amy) Schumer. And I’m doing a pilot for FOX, pilot for Comedy Central that I’m in and writing as well. It goes into that, doing something everyday. With this, you’re basically a temp. You go in for two weeks. You don’t have time to get super enmeshed with people. For people to hate you. I always say its like being a grandpa. Sure, I’ll hold your baby! And then you hand them the baby back after two weeks.”

Whatever happened to the other FOX “ShortCom” series you shot last year?

“The FOX thing they did…mine got promoted to a half-hour, which I’m doing a pilot for. I turned in the script (in late December). The governor called. We got bumped up. Same concept. Different story. The basic connect is me and a black girlfriend. This is a ramped-out version of that. The original was only 11 minutes…this is more characters, more sets and all that shit.”

Do you know if we’ll see the other FOX shortcoms? “They’re never going to air those.”

Ha. That’s too bad. I still want to get my hands on the FOX In Living Color reboot, just to see why the network passed on it.

“Not me. Yeah, I’m one of those people who go, ‘No, I’m going to take your word for it.’ When there’s a ton of deleted scenes (on a DVD) and then you watch and go that was waste of my time. Sometimes secrets are kept because they’re shameful.”

Since you’ve got an ear to the ground on all of this, then, what did you make of Saturday Night Live’s response to claims of racism and sexism by lacking a black woman in the cast for several years (Brennan and I spoke after SNL’s public acknowledgement of auditions but before hiring Sasheer Zamata, who makes her debut in the SNL cast this weekend — up against the debut of Brennan’s Comedy Central special!)?

“I hate that it’s public. I think, I just said to somebody, now that there’s a lot of comedy bloggers, and comedy journalists, and they’re trying to…they for the most part don’t know what the hell they’re talking about. When people submit to SNL, with their long sketches, they act like it’s not a good show. It makes me bananas. Are you going to trick the people who do nothing but write sketches into thinking you’re a good sketch writer? We don’t have good taste, despite us consistently over the past 40 years being the best collection for young comedy people. But our show routinely kicks out world-famous writers and comedians, despite the fact that it fucking suckkkks!”

“Trust me, I know what goes into casting.”

“It was like making Chappelle’s Show hire a Puerto Rican woman. Like they know who their writers are?!”

“They absolutely should (hire black women on SNL) but the reason they’re doing it at gunpoint, I find it galling…I hope her first name is Quota, because that’s all people are going to see. Youre making it hard on her. I might have seen it in the Wall Street Journal that black girls aren’t on the show because they’re not at Upright Citizens Brigade or Groundlings because they can’t afford the classes. Guess what? That’s more raacist than anything SNL has done!”

“They didn’t hire Ellen Cleghorne because she was black. They hired Ellen because she was the best comedian who auditioned. Do they need to look in other places? Definitely. But it’s not like a black woman auditioned who was better than anyone else who had auditioned.”

Maybe everybody needs to just relax. Here. Here’s a clip in which Brennan discusses all the races chilling out.

What can you tell me about the Comedy Central pilot you’d star in?

“It’s a sketch show where I’ll make shows, direct some and write some, and then I’m going to put those sketches on an iPad or tablet and ask random people if they think they’re funny. This goes back to everyone thinking they’re an expert on comedy.

“What I’m looking forward to us a bunch of people — eight people saying yes, and one person saying no.”

That idea that everyone is a critic has exploded itself virally via social media.

“It’s all absolutes. Its all the absolute best or the worst.

“It’s giving people the power that they don’t deserve. But I do find it endlessly fascinating. I wrote a joke on Twitter. It might have been a couple of years ago. Mike Schur wrote me a reply. And then someone wrote underneath that, ‘100 percent bomb.’ Not you better be careful. It was absolute followed by another absolute.”

“I think it was a joke in the (Comedy Central) Half Hour I did about people got good bodies by doing good deeds…and, by the way, the fact that I did the joke on Conan and on the Half Hour, the kid never came forward to say he was wrong.”

Have you started writing your next hour? It’s refreshing to hear you’re not in a rush like seemingly everyone else in stand-up to pump out new CDs and DVDs…

“I think it’s diminishing returns. If they’re not good, what’s the point? Also, I don’t have a theater tour…I don’t have to get out to the Fox Theater in Detroit with a new hour. The thing with me, I have the luxury of no one caring. But you know, I’m more on the Bill Burr thing. It’s every two years. Maybe it’s every year-and-a-half. Ether way, I’m not going to just rush into it.”

Or, to put a finer point on it:

“It’s fucking not easy. It’s not easy to write an hour. And I’d done and hour of a half on TV over the past year. And now I realize, the real work begins. Of writing a second hour. Now it’s less of jokes I think of, and now it’s like, do I even want to say that? Now I see what happens downriver. Do I want to say that 300 times? This is slightly different from survival mode.”

Brennan also co-hosts the podcast, “The Champs,” with Moshe Kasher.

Previously: The Comic’s Comic conversation with Neal Brennan in 2012 on race, brothers in comedy and social media. 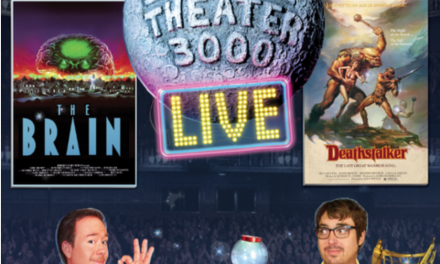 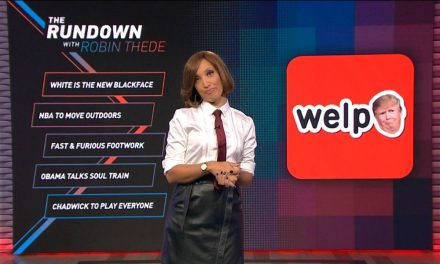 BET bails out of late-night talk, cancels The Rundown with Robin Thede