You Can’t Take a Joke (But You Did) 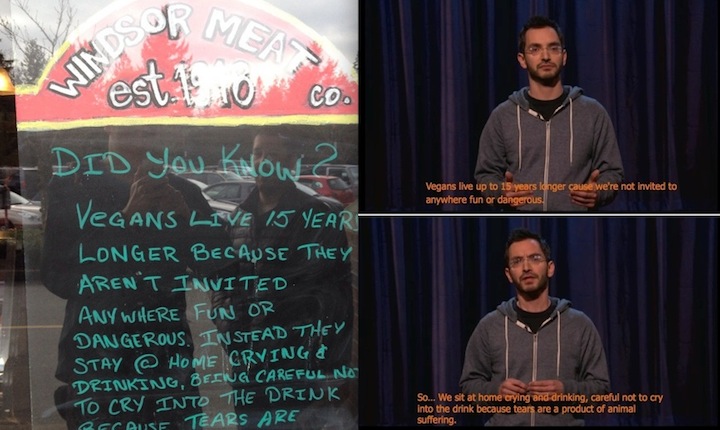 Hello, internet people, including whoever put a joke about vegans that I wrote on a butcher shop window.

A while ago, someone took a photo from that set and put some of the words of the joke over it, here:

They didn’t use my name but they did use my face, so it didn’t seem like they were trying to take credit for coming up with it. No worries!

This past week, people started messaging me about that same joke appearing on the window of a butcher shop, here:

They did this without crediting me, without permission, and without the context of it being told by a vegan; in fact, with the exact opposite context. You know how I could say I hate my family, but if YOU say you hate my family, I might chop you up and eat you, if I weren’t vegan? It’s like that.

Context is important. Most places this story has popped up (Buzzfeed, Reddit, Imgur, etc.), the story always seems to be “Butcher shop makes joke about vegans,” and not “Butcher shop took joke about vegans FROM vegan (and butchered it, as they do).” Actually, they didn’t butcher it that much. It’s still very recognizable as the joke I wrote, with the only part that was chopped off being my name and face and such.

I haven’t read all the comments and responses, but a running theme seems to be “Vegans and vegetarians don’t have a sense of humor,” coming from people who think the joke was made by a meat-eater at the expense of vegans.

But I’m the vegan who made the joke. And I can take a joke, I just can’t take that a joke was taken from me. (I mean, I technically CAN take it. I’m strong. From spinach. Like Popeye.)

But I do think that when people create something, other people shouldn’t take it and use it without permission or credit. So I just wanted to let people know. Thanks for reading, and for leaving everyone’s faces un-chopped as desired in the future!

A lot of people have responded, many positive (thanks!), including someone from the butcher shop in question.
Here is part of what they said:

“I manage a butcher shop in West Vancouver, Canada. Let me start by apologizing in the wake of the sign in our butcher shop that went viral last week. I wanted to let you know that I never meant any of this to happen. We regularly try to write funny signs for our customers and although it is normally original content I had stumbled upon a video clip of yours however I did not know your name at the time (something I did not find out until the picture got posted to reddit last week). In hindsight I should have made an effort to find out and ask for your permission to use the joke and in the very least credit you for something that we found amusing. It was not intended to be passed on in any other fashion than to give people the same laugh that you gave me. However this is not meant to be an excuse. Just a reason why all of this has happened. We harbour no ill will toward vegetarians or vegans but have a general love of food culture and comedy.

I read the post on your website about “chopping off your face”, (quotations are important I’ve learned) and you made me realise my mistake. For that I want to reiterate that it was an error in judgement and I hope you can accept my apology for use of your material. I think you are an incredibly talented comedian and a great performer.

If you have any questions please feel free to contact me.”

I wrote back a note of thanks, and didn’t even point out all the things they spelled wrong (e.g. realise, harbour, etc.). It was sincerely appreciated. 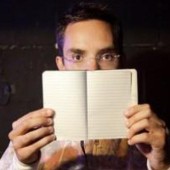 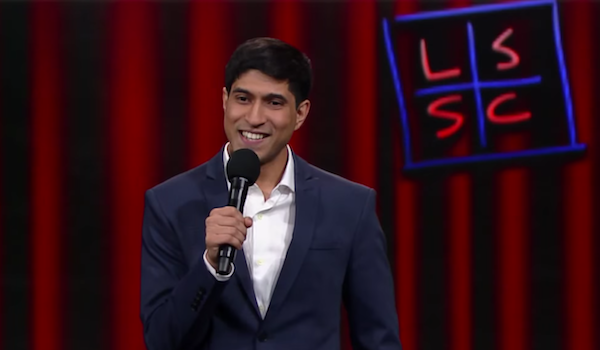 Alingon Mitra on The Late Show with Stephen Colbert 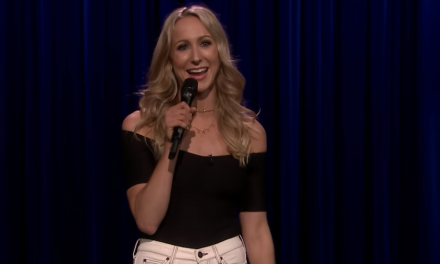 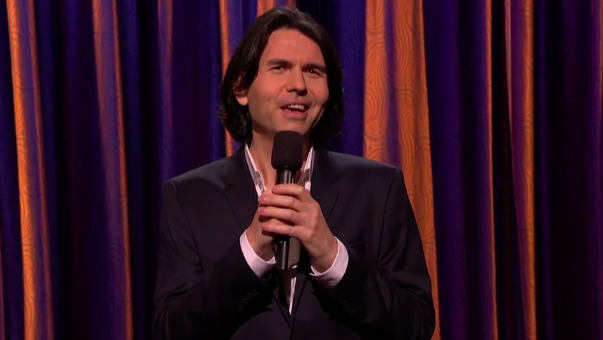