Last year’s special guest at the Andy Kaufman Awards was Tony Danza. This year? A 24-year-old woman claiming to be Andy’s daughter. Which is a neat party trick, considering Andy Kaufman died 29 years ago, in 1984.

Trick or treat, you’re likely to get both from a Kaufmanesque performance.

At least one Kaufman — Andy’s brother, Michael — was onstage Monday night to preside over the ninth annual Andy Kaufman Awards, held at Gotham Comedy Club in New York City. The myth that Kaufman may have faked his own death, and gone into hiding rather than succumb to cancer at the age of 35, has sustained itself as readily as the notion that Tony Clifton is a singular person and not an anti-comedy Spartacus who is Kaufman, Bob Zmuda and even you if the timing is right. Playing with our conceptions of reality was at the heart of Kaufman’s performances. An exhibit “On Creating Reality” encouraged fans of the legendary comedian to re-engage with that spirit, as well as the people who knew and loved Andy, earlier this year in NYC.

Michael Kaufman takes the stage at Gotham Comedy Club to thank the audience and the competitors (Harry Terjanian‘s win not yet announced), and also to talk a bit about his brother’s legacy. Michael’s short answer to people who ask him if Andy is still alive? “I don’t know.”

His longer answer, it turned out: Well…

Michael Kaufman told the audience that while cleaning out Andy’s things after his death in 1984, he found among his many writings an essay about how Andy planned to fake his own death, his literal, figurative and spiritual leaps through meditation, and how he’d eventually reappear on Christmas Eve on 1999 at a particular restaurant that had served him a favored dish years earlier. When that date arrived, Michael said he ventured to the restaurant, asked for a table under one of Andy’s pseudonyms, and waited. He didn’t meet Andy that night, but said someone handed him an envelope, and in that envelope was a letter addressed to Michael from his brother. The letter purported that Andy wanted to go into hiding and live a normal life, that he’d met and fallen in love with a woman and had a daughter, and that he didn’t want Michael or anyone to say anything while their own father was still alive. Andy’s and Michael’s father died this summer. Michael said a young woman called him a month afterward to say that Andy indeed was alive, that he was watching the Andy Kaufman Awards from afar and loving the fact that so many comedians had been inspired by him. When Michael asked the Gotham audience if that young woman had showed up Monday night, a 24-year-old eventually stood up from the back of the room and sheepishly made her way onstage.

Michael asked the audience if they believed her, or him, and said he didn’t know what to make of it all himself.

Killy Dwyer, one of this year’s Andy Kaufman Awards finalists, already had burst into tears while Michael was reading the alleged 1999 letter from Andy.

“Ok. Tonight was a mindfuck. Anyone who was there will attest. Andy Kaufman‘s daughter came onstage and claimed he was alive. It was. It was…I can’t tell you how it was, only that it was as real as any reality that i’ve seen. and yeah. I get that it is – could – might all be a hoax. That was the only and last thing I want to say. it was fucking fucked up. She said he is alive and that the passing of his father this July made him want to reach out via her- to Michael, Andy’s brother. She said he is watching the award entries, semi and finalists with great interest always. He just wanted to disappear. To be a father. To be an observer. As much as this seems like bullshit as I type it, it was as real as anything I’ve ever seen. There is video. It was chilling, upsetting and absolutely intriguing. I bawled my eyes out. The entire room was freaked out. It was, if nothing else, brilliant. and incredibly mindfuckng and AWESOME.”

Michael escorted the young woman offstage and asked that we respect her privacy.

Another audience member told me later that he knew the young woman was a theater student, but that he’d never met her father. So who’s to say, really.

UPDATE: Here is edited footage from the woman’s appearance onstage, standing away from the microphone, as she is questioned by Michael Kaufman. Supplied by an audience member to TMZ.

Above: Michael Kaufman, holding a photo of his late brother Andy, onstage at Gotham Comedy Club interviewing a woman claiming to be Andy’s 24-year-old daughter. Andy died 29 years ago. 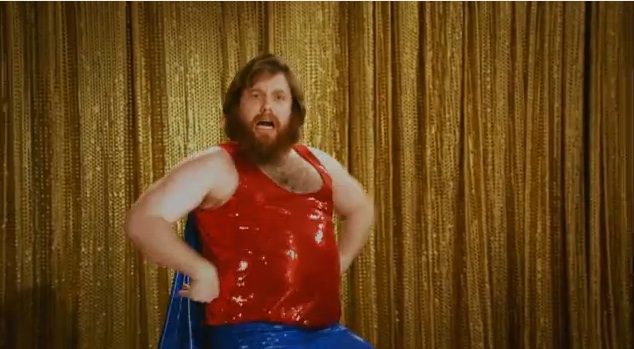 Are you ready for more Spinal Tap?