Taylor Williamson modified his Twitter bio @TaylorComedy this summer to read: “I’m going to lose on America’s Got Talent.”

A few months later, summer ends this week, and Williamson finds himself in the final six on NBC’s “AGT” – performing live tonight from Radio City Music Hall and learning Wednesday night whether he in fact does lose, or instead, more tantalizingly, wins the $1 million grand prize.

The Comic’s Comic caught up with Williamson over the weekend as he was practicing his finale stand-up performance, and spoke with him in the Olive Tree Café above The Comedy Cellar.

How does it feel going from years of working your way up the comedy club ladder, performing for audiences with two-drink minimums, to now this summer appealing to all ages, from teen girls to seniors and everyone in between?

“It’s really weird,” Williamson told me. “It’s honestly a dreamlike scenario. Because of Howard Stern, I was able to sell out the Hollywood Improv with adults. So I appeal to adults, which is who I want to be appealing to. But the bonus is that I now appeal to an entirely different demographic which is teenagers and younger – pre-teens and teenagers are enjoying what I do, and it’s really special and cool. I watched Howie Mandel, I watchedBobby’s World growing up. He was the first comedian I saw perform on TV, and now I’m having kids come up to me saying I’m the first comedian they’ve ever seen perform. It’s really special and cool. When they come up to me and say that, it makes me feel really special, because I know how that feels to meet the first person you watched. It’s an honor.

“I feel a lot of pressure to deliver every time and to do something interesting every time. People who have never seen stand-up comedy before, kids and adults, who aren’t exposed…

“Last Comic Standing had a smaller audience, because only comedy fans watched. People who aren’t comedy fans are accidentally finding out about me. And now they’re coming to my shows. I feel like I’m bringing attention to my art form which I love so much. I’m really excited about that, and it’s a privilege.”

“I did it as a joke, because the magician kid had a name for his fans. It’s kind of a marketing thing. So I thought, I wanted to go with Williamsons of Bitches, but it’s kind of inappropriate. I don’t think I can say that on TV! So I thought Taylords sounds funny.”

It fits better with Twitter – uses up fewer characters.

“Yeah, but it works! And people are into it. And no one asks about it or what it means. I’m aware that it rhymes with something. It might be a coincidence about that. But I just love that Heidi Klum admitted that she’s a Taylord! I’ve been trying to get Heidi Klum to say, ‘I’m a Taylord,’ but for her to give me a thumbs up, that’s pretty cool. Artie Lange and Heidi Klum are my most famous Taylords right now.”

But Howard Stern has been a huge supporter of yours, too.

“He won’t say he’s a Taylord, but he says he loves me,” Williamson said. “The whole Howard Stern Show has my back! All the people in the crew are supporting me. It’s really amazing…I’m living so many dreams of a comedian right now because of this show, and it’s overwhelming. Too good to be true. Two months ago I had nothing, and now I have everything.”

Right. Several comedians I follow on Twitter also have been helping get out the vote for you each week.

It was just a month ago I was asking you what it’d take to win, and now you’re this close to finding out. Do you feel differently about your chances now?

“I don’t think I’m going to win, still, but I’m just excited to be getting to perform on TV and doing what I love. All the people who have voted for me, it’s overwhelming. I could never imagine that people would vote for me and believe in me like that, so I feel an obligation to do well just on behalf of all of the people who have supported me. These kids who said they voted for me 1,000 times. They have a family party, and they use every phone in their family to call me – it’s amazing! The Taylords! It sounds so dumb, but I’m here because of them, and I owe them. My dreams are coming true because of them. It’s really amazing.”

“It’s really cool because with all of the rejection and experience in this business, in the industry, that now the people who matter – which are the people – producers and casting people who won’t give me a shot are not the ones that matter. It’s the consumers that matter. I’m in a position now, where, I still want to do all of the talk shows and do all the specials, do all of that, you know, have a sitcom and do all of the stuff that people want to do. But I can sell tickets to venues now, without worrying about an agent now, if I don’t want to have an agent! It’s amazing! It’s too good to be true. It’s every comedian’s dream.”

“I have friends who are on sitcoms and no one knows who they are. They’re on hit sitcoms, and they don’t sell tickets. For whatever reason. But I have a name. I’m Taylor, the comedian. I’m not, ‘Oh the guy who plays that guy on a show. He’s a comedian? I didn’t know that.’ I’m Taylor, the comedian. The stand-up comedian. It’s so funny that, I mean, we’re sitting next to Louis C.K. (one table over) He has the dream as a comedian. He’s known as a comedian who has a sitcom. I want to be that. I want to be the comedian who has a sitcom, but he’s known as a comedian first. I don’t want to be the guy on a sitcom who people don’t know is a comedian. And people come (to the club) not knowing who they’re coming to see. I have any dream a comedian would want. They know what my comedy is like! They know what they’re coming to see! That’s too good to be true.”

Williamson’s last-minute appeal to fans, posted on his Tumblr yesterday.

Earlier: Williamson and the other comedians competing in 2013’s season of AGT told The Comic’s Comic what they thought it’d take to win the competition.

When Vanessa Bayer needed a date, where were you? Not on Comcast’s Dating on Demand 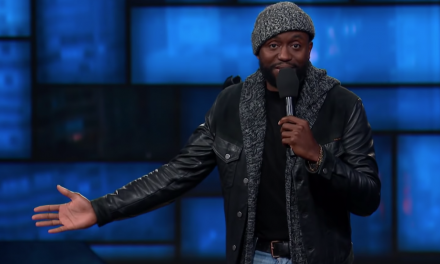 Byron Bowers on The Late Show with Stephen Colbert