Andy Kindler’s State of the Industry 2013 at Just For Laughs: The case against Adam Carolla 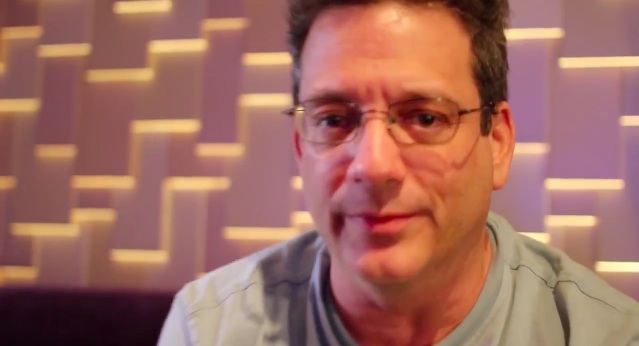 Did Andy Kindler make any self-deprecating comments during his State of the Industry at Montreal’s Just For Laughs festival?

Did I need to include a year in that previous sentence?

Rhetorical questions aside, Kindler’s annual rhetorical roast of the year in comedy and show business again delighted and amused the packed ballroom at the Hyatt in Montreal last weekend. Kindler’s targets included usual suspects (Jay Leno), industry vets (APA’s Mike Berkowitz, who told people afterward how delighted he was to be ribbed by Kindler) and trends (he had a great Vine chunk), and himself (early and often). Unlike past years, however, Kindler decided to bypass several pages of jokes for the sake of time so he could focus his energies on a semi-serious attack on Adam Carolla. In as much as these things ever are.

“I’m going to say something here, and then I’m going to go back to the comedy. There’ll be comedy here…

I think P.T. Barnum said, ‘There’s an Adam Carolla fan born every minute.’ H.L. Mencken said, ‘No one in this world has ever lost money by underestimating the intelligence of Adam Carolla fans.’ I’d like to apologize to everybody here, and everybody in America for going on Adam Carolla’s terrible, terrible podcast. I really had no idea. I just thought he was The Man Show, and he was — I didn’t know he was a terrible human being. I thought he was slightly amusing and kidding around. I had no idea that he’s a bigot with a capital NAZI.

The first time I did his podcast, it took me an hour to get there. And he put me on for 10 minutes. He never makes eye contact. He’s incapable of it. But he’s always like, ‘Andy, please, take the gas money.’ He was, ‘Please, here’s some food, Andy.’ He’s such a good guy! The second time was at the Jon Lovitz Tragedy Club. When you think of people who were funny 20 years ago, who do you think of? Jon Lovitz. Don’t you? Pack ’em in! By the way, you know a white person is leaning toward racism if they start all of a sudden complaining about how much taxes they pay under Obama. And that’s what Jon Lovitz has done, turned it into a pastime. Everybody’s racist is the point of this speech!

So I went to the Jon Lovitz Tragedy Club in Universal City. And, I mean, it’s not the worst comedy club in the world. It’s the worst enclosure ever planned. They called me, a couple of months after I did a set there, they said one of my jokes just hit the rafters. Which are infinity ceilings. So here’s what you do. You want to do Adam’s, Adam Carolla’s podcast? You go up to Universal City. You park in Curious George 4 or wherever you park there. Goofy 3. You pay $20 fucking dollars. I don’t go blue. Fucking dollars. Freaking! You pay that. Then you take a four-mile hike over to the Lovitz comedy club, where all you’re thinking the whole time is, I will not be — they will not give me money for the valet, it’s not going to happen for the parking garage, I’m down $20 and I haven’t even started the podcast.

By the way, anybody who goes on Celebrity Apprentice. You’ve got to either not know what’s going on, or you’ve got to be a racist. I’m just telling you. You’re all racists if you go on. He is raising money on Donald Trump’s Kickstarter thing. And it’s not money for him to have a comedy workshop, or for therapy to find out why he’s a jerk. He’s raising money for a movie called Road Hard. This is literally unbelievable. I think the name of the movie should be called Road Kill. Again. I apologize to the world for being in the same camera shot. Whatever. Just being next to Adam Carolla.

I’ve got to wrap up this tirade in two minutes and get back to the comedy. The comedy!

What Colin (Quinn) said the other day, and I have to admit my own shortcomings in this area. Colin said, I don’t even know Sam Morril, I don’t know what that thing was, but I do know that Patton Oswalt did a brilliant joke a couple of weeks ago about the San Francisco TV station that said all those Chinese names that were sent in to them fake, like Hung So Lo, whatever. So Patton Tweets that, ‘they just hired a PR person, Wi So Solly.’ And Salon goes after him, ‘How could you say this?’ That is a perfect joke! You could not be — you’d have to run sideways to not get that joke! And then this horrible Salon bullshit! I’m not articulate. They start going after Patton. Look, I have some issues with Patton. He’s very modest. But still… Brings it back to him. But look! He’s hilarious. You can’t deny it. He’s hilarious! And they start going after him. ‘We saw your Twitter feed and we saw your jokes from 1992.’ You are idiots! You have to be familiar with the field that you’re talking about. So I get that. But also. I also get that, if people don’t like things, they should have every right. Because comics are so thin-skinned. They’ll say, ‘Get the hell out of here, you fucking idiot!’ They don’t say that. They say worse. When someone says, ‘I don’t like what you said.’ ‘GAAAAHHH!’ So. You get to say anything you want…

So the point is. My point is… Look. If you’re not a comedian. If you’re literally not saying anything funny, you’re just a bigot or a racist. I’m telling you right now. I don’t even have to tell you where to go on the Internet. You go to any of these Internet sites, and here’s one: ‘I hate Mexicans. I don’t hate all of them, but they come to this country, they have no values, and they don’t like to work hard.’ He says, ‘These black people…’ I don’t do good impressions. ‘These black people say they can’t get a cab in New York, but, you know, the cab drivers aren’t even white, so that’s not our fault. Maybe these cab drivers know something about these black people!’ Yeah. OK. If you’re not stunned, you should shoot yourself in the head. Alright. So you have to be funny. And I submit to you that there’s not a funny bone in Adam Carolla’s body. I do. Maybe he was funny with Jimmy Kimmel. But he stinks on his own. And I hate these people who think they’re stand-up comedians because they’ve done it a couple of times. Ricky Gervais had a hilarious show. He does four stand-up shows, he’s on a panel on HBO with Chris Rock and Louis C.K. and I forget the other person (Jerry Seinfeld) and they’re talking about comedy. He thinks he’s — that’s the worst thing — he thinks he’s great! I would know if I had never done a — I tell you, Ricky Gervais, if there wasn’t licensing, he’d be in a hospital right now, performing brain surgery. He’d be like, ‘I do things well!’

So, he says. ‘Bruce has one simple question: What the hell happened?’ This is from the description of the show. ‘It seemed like just yesterday his TV show was a hit, he had a hot young bride and his phone wouldn’t stop ringing. Like his mythological Greek forebear’ — you have, you know nothing about Greece! You bone-headed, hate, muscle-headed hate bot. Look, if he comes after me, I’m going to fucking cry and go into a ball. God damnit!

[Glass] Fuck everybody here for not being as angry as you at that fuck!

You know what he said? He had this, he said I don’t know about these people with the sex changes, it’s ridiculous, it’s disgusting. Then he goes on, and ‘I’m sorry if I hurt people’s feelings, because I’m a comedian.’ You are not a comedian! Comedians tell jokes. They have a premise. And they have a punchline. And if they’re good: Tag, tag, tag, tag, tag, tag, tag! Callback!

OK. I don’t even want to finish this fucking guy’s fucking description of his show. What Adam Carolla’s doing, neo-Nazis should have thought about years ago. They should have beat black people’s heads in…in a comedy club. It’s comedy, right? I’m a comedian! I’m a violent comedian.

Adam Carolla is like Hitler, if Hitler wasn’t funny. Donald Trump’s website is called FundAnything. He means, maybe you want to start the KKK in your hometown but you can’t afford the sheets.

OK. This is the best part. I hope I have it. We all love Steve Hofstetter, right? OK, so here’s…OK. He writes this. Somebody sent it to me. My inside guy. He writes this yesterday. This is from Steve Hofstetter. Everybody’s — who emails me things like, ‘One nighter. In Texas. Fly yourself in. You pay us $20. Share a room with a horse and the other talent. Clean up after the show. Bus the tables….

OK. This is unbelievable. This is so great. On the eve of my show, which I was certainly prepared for. This is the worst….(Kindler asks for time)… ‘Fellow comedians. Adam Carolla is looking for three comedians to put in his new movie, Road Hard.’ This is from Steve Hofstetter. ‘It’s the hilarious story of a beleaguered stand-up comedian trying to find his way. Road Hard is a crowd-funded movie. That means all the funding and money comes from wonderful people like you. It also means that there won’t be any studio executives giving notes. Because the movie’s budget is raised by people excited about the project. That gives Adam’s team…’ He has a fucking team! Sorry. ‘…complete creative control. And that means this is going to be a damn good movie. At the time I write this, Adam has raised $779,000 of the $1 million the film needs to happen.’ By the way, he doesn’t have to raise $1 million, he gets to keep the money. ‘Providing amazing prize packages like set visits, in-home stand-up performances, premiere parties and more. Adam is helping change the face of Hollywood. There’s an incredibly unique prize package up for grabs, which is to send a tape to Adam. He will personally review and pick three comics to not just be in the movie, but to have their stand-up featured in it as well. Currently, only 55 comedians have submitted, so you have pretty good odds. That is one hell of an opportunity. Whether or not you get chosen, you get reviewed, you get some amazing movie swag, and your name will be in the credits.’

So, the deal here, is he’s charging comedians to be in his movie, and he says ‘Must not be SAG-AFTRA.’ OK? Alright.”

You can hear Andy Kindler’s entire State of the Industry from 2013. I have a recording of it, too, in case you want to plug into my phone. 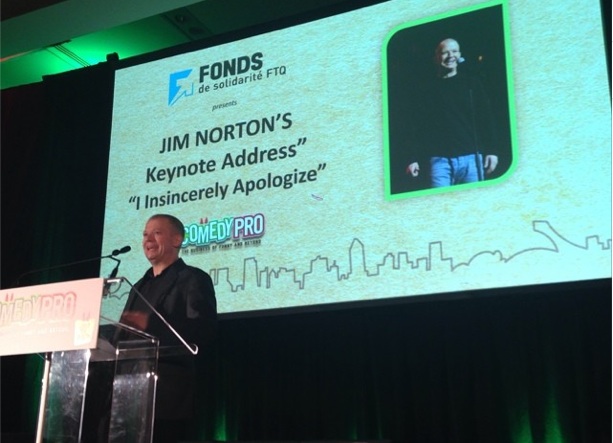