At Daytona International Speedway this weekend, the mainstream media is all about Danica Patrick and her bid to win the Daytona 500.

But there’s another race to be won tonight. After the Camping World Truck Series event ends, the man who waves the green flag — comedian Jon Reep — will preside over his own racing series as the host of SPEED channel’s new show, R U Faster Than a Redneck? The eight-episode series sneak peeks tonight, then officially debuts Monday, pitting drivers of American muscle cars against drivers of sporty imports in a winner-take-all, $10,000 series of races.

On a recent episode of his “Heffron and Reep” podcast with comedian and fellow former Last Comic Standing winner John Heffron, Reep said the $10,000 prize for the winning driver comes out of his salary and bonuses for the show. “I’m like the redneck Ben Stein, if Ben Stein had a way lower IQ,” Reep jokingly explained. “There’s a lot at stake for me, so I’m definitely rooting for the rednecks.”

On the phone today with The Comic’s Comic from Daytona, Reep noted he and Heffron haven’t had as much time this month to record new episodes of their podcast. “We’re both on the road a lot of time, doing stuff,” Reep said. “I wish we could do them more often.”

Despite being a Detroit guy, Heffron didn’t contribute his Motor City knowledge to Reep’s new project, either. “We haven’t really talked too much about it,” Reep said. “Yeah, that would be a natural assumption to make. I assume everyone from Detroit knows everything about cars.”

R U Faster Than a Redneck? doesn’t require Reep to be an expert. In fact, it was his series of TV commercials for Dodge, in which he asked people if “that thing got a Hemi?” that brought him to the attention of the producers for this SPEED series.

“The TV show, when you were a kid, you’d think it was a bunch of fun, jumping into cars and racing,” Reep told The Comic’s Comic, saying he enjoyed the bumbling antics of Sheriff Rosco P. Coltrane. “When you try to watch it now, it’s like a cartoon with actual people.”

Reep’s childhood and his current career collide on R U Faster Than A Redneck? “We have Bo Duke, John Schneider, is going to make an appearance as a celebrity redneck, and he’s going to race,” Reep said. “I’ve met him before. He’s a cool guy.” Their previous encounter came back in 2006 in Las Vegas when Reep performed on Pit Stop Comedy, a stand-up special Schneider hosted for TBS.

Another highlight from these first eight episodes of Reep’s SPEED series: “A guy gets bitch-slapped” following a race for showing poor etiquette during the race. “That whole day was about lawyers,” Reep said. “And that was the first day (of filming). I was like, ‘God damnit!'” That kind of post-race altercation does happen from time to time in NASCAR, too, with Tony Stewart throwing his helmet at a competing driver’s car following a crash, or drivers confronting each other in the pits or the garage. “I think if NASCAR were smart, they would embrace that, just like in hockey,” Reep said. “It just gets more eyeballs attracted to your sport. If (fans) knew they might get out of their cars and fight every five minutes, they’d watch more!”

Make it like wrestling, maybe? “That’s how they should fight for pole position. They shouldn’t race. They should just wrestle,” Reep said.

Pole position at this weekend’s Daytona 500, NASCAR’s most prestigious race of the year, went to Danica Patrick. And the media is having a field day about it. Not Reep, though. “I’ve been wanting to tell these jokes about Danica Patrick, but I can’t,” he said. NASCAR fans cannot take it? Let’s give one a try. “They’re saying she’s the first chick to get pole position,” Reep said, “And I say, I’m pretty sure Jeff Gordon has won before.”

“See, that’s not even a joke about Danica, that’s about Jeff Gordon,” he said.

And don’t get Reep started about the Fast and the Furious movies, either. “I just don’t like Vin Diesel,” Reep said. “I can’t watch him.”

Reep hopes you will watch his muscle-car show, though, as well as a big-budget movie he’s filmed called Black Sky. It’s a found-footage tornado film, starring Sarah Wayne Callies and Richard Armitage, with a cast that also includes Matt Walsh, Jeremy Sumpter and Nathan Kress. “My character is comic relief,” Reep said. “I play a Johnny Knoxville type character who is doing Jackass-type stunts on YouTube” when he and his character’s friend cross paths with a group of storm chasers and decide to follow along. Black Sky filmed near Heffron’s native Detroit, and Reep said his podcasting partner “told me where to go, grub to eat, but it was mostly hurry up and wait” for Reep’s time in Michigan.

Before going by Heffron and Reep: “We were called ‘Last Pod Casting’ for a little bit, but it didn’t have our names in it.”

Reep’s stand-up tour dates have him spending most of his 2013 spring and early summer across the South and into Texas. He’s also looking at more TV opportunities.

“I’ve been getting all of these hosting auditions recently.” On one, he said: ‘They flew me to New York to do this audition, kind of like Dave Attell’s Insomniac, but more about food and the bar scene. I would go into a bar and meet people, have shots with them, ask them what’s their favorite comfort food to eat at 2 in the morning.”

So when can we look to see Reep fronting that show? “That was a month ago,” he said. “No. I can already tell you, that one didn’t work.”

R U Faster Than a Redneck? did work. It previews tonight on SPEED, and airs at 9 p.m. Eastern on Mondays.

Yowie zowie! Watch Gil Ozeri watch two and a half days of “Two and a Half Men” for Funny or Die 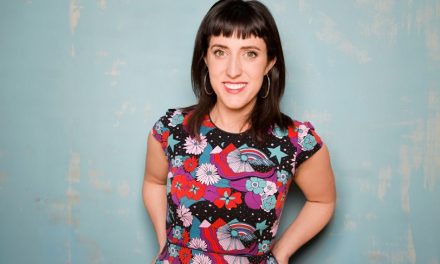