This is what aspiring stand-up comedian Caleb Medley looks like on his home page. 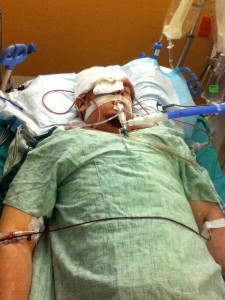 But this (right) is what Medley looked like today, lying in a coma in University Hospital in Aurora, Colo., with a gunshot wound to his eye and head. Medley, 23, was one of the dozens of victims of the massacre that played out during a midnight screening of The Dark Knight Rises early Friday. He attended the screening with his wife, Katie, who is due to give birth to their first child, a son to be named Hugo, today. Neither mother nor impending baby were harmed during the shooting.

“(Caleb) is in stable but critical condition and they are monitoring his condition,” said Medley’s father-in-law, David Sanchez, who addressed reporters today outside the county courthouse where the killer faced his first hearing. (Denver Post)

Caleb and Katie went to the midnight movie, because, as a site helping the Medleys says, they had decided “to treat themselves to one last thing before they “officially” became parents.” And the night before this, Caleb Medley had competed in and advanced out of the first round of the Denver ComedyWorks “New Faces Contest.”

Medley, like most stand-up comedians from novices to headliners, does not have health insurance. And neither does his pregnant wife.

His friends, family and loved ones have set up a site — http://calebmedley.com/help — to raise donations to cover both of their hospital bills. The site says that Medley lost his right eye and has suffered brain damage.

If you are in financial stress and can only support Caleb through prayer or by sending him your good thoughts, thank you. If you are able to help financially, thank you for that too. Any amount is helpful, even a dollar will help. Just click HERE.

If a lady on a bus verbally harassed by a kid can receive more than that in donations, then certainly this couple — soon to be parents and baby — is worth that much.

UPDATE: Katie Medley gave birth at 7:11 a.m. Tuesday, July 24, 2012, to Hugo Jackson Medley. They’re in the same hospital — Colorado University Hospital in Aurora — as Caleb. Caleb remained in critical condition but showed signs he was aware of the people visiting him and following commands.

Here is a video of Caleb Medley in much more easy-going times, uploaded by him in November 2010. It’s a travelogue as Medley and two other Denver-area stand-ups hit the road, driving long distances for one-nighters in Nebraska and Wyoming.

The truth about Last Comic Driving

Leave a Reply to none Cancel reply