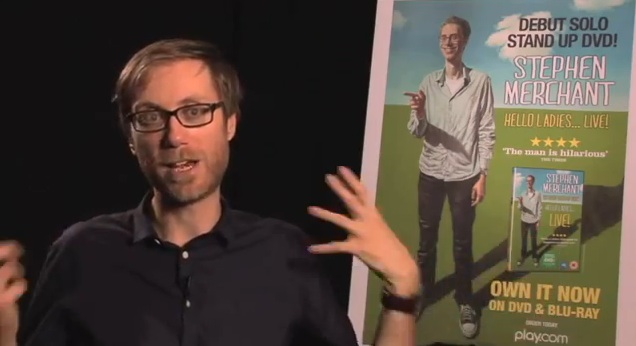 Stephen Merchant, whom you may well know as the co-creator with Ricky Gervais of both The Office and Extras, (as well as The Ricky Gervais Show and podcast, An Idiot Abroad and Life’s Too Short) is wrapping up his first major stand-up comedy tour with his first dates in the States. A small show at UCBeast on Sunday, Dec. 18, as well as a theatrical debut at Town Hall, on Tuesday, Dec. 20, already have sold out. Tickets do remain for the Wednesday, Dec. 21, show — but if you cannot pay for them, perhaps you could win one of five pairs of tickets that The Comic’s Comic has!

Ticket giveaway time! But first, let’s see a few quick clips of Merchant onstage mixed with backstage chat with him about his return to stand-up. Roll it.

Alrighty then. Where was I? TICKET GIVEAWAY! Post your best plea in the comments below and I’ll pick five winners who can make it to Town Hall in NYC on Wednesday, Dec. 21, to see Stephen Merchant perform live.

The rest of you will have to try your luck with Ticketmaster. Good luck!

Oh, and if you’re on the West Coast, know that Merchant has a few dates planned in January 2012 in Los Angeles (at Largo) and San Francisco (at Cobb’s).