The evolution of Mick Foley: From “hardcore legend” wrestler to stand-up comedian

Mick Foley’s wrestling comeback hasn’t fared quite as well as he might have hoped in the past week, getting slammed to the mat — “Rock Bottomed” — by Dwayne “The Rock” Johnson last Monday during WWE’s live “RAW” telecast. But just hours after Sunday night’s “Survivor Series” pay-per-view event at Madison Square Garden, Foley traveled a few blocks down Eighth Avenue to perform stand-up at the Upright Citizens Brigade Theatre. 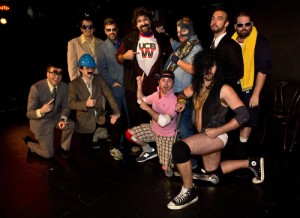 Foley’s stand-up comedy last night wasn’t done as a lark nor as a stunt. He was making good on a promise he had made to the UCB comedians to return to their stage after making a special guest appearance during the UCB’s own weekly “Cage Match” improv showdown.

In the meantime, Foley has been performing stand-up on the road, too. He completed a brief comedy tour in the UK last month, and has a few dates lined up at the end of this month in Canada. On his own site, Foley wrote a post titled, “A Serious Attempt at Comedy,”in which he outlined his current evolution as a performer and entertainer. He recounted that after a gig this summer in upstate New York, five times as many people preferred to pay money for a meet-and-greet with him than to watch him do stand-up. As he wrote:

“But the two promoters of the show heard the same two comments over and over again: I didn’t know what to expect, and I didn’t think he’d be that good. So, the challenge, as I saw it, was to make people more aware of what they might expect, and to do my part to make sure the shows are as good as I can make them when people make the decision to see me do something other than what they are used to seeing me doing. Honestly, it’s not a challenge I know I’ll be successful in. It’s like going to see Will Ferrell or Adam Sandler in dramatic roles; yes, they’ve both done some great work, outside comedy, but it’s not quite the way that people like and feel happiest seeing them. Funny, but one of my inspirations is actually Justin Timberlake, who has been able to take people who literally could not stand his music, (me being one of them) and turn them into fans of his comedic acting. His SNL stuff is just priceless!”

Foley also wanted to stress that his current incarnation as a comedian is nothing like the “Total Extreme Comedy” tour he had undertaken a few years ago. “Ticket prices were too high, there was nothing “Extreme” or “Total” about the comedy I, or Colt Cabana, or Bruce Pritchard performed, and expectations may have been a little unrealistic. Really, should any of us, with a cumulative total of about seventeen comedy shows under our belt, have been booked into the same 3,500 seat theatre that Elvis used to play? Probably not.”

It’s not uncommon for professional wrestlers to take advantage of their fame and often cartoonish in-the-ring tactics and bring their comedic talents to Hollywood. Hulk Hogan, “The Rock,” and the late Andre the Giant (Princess Bride!) are the best-known examples. Old-guard wrestlers from the 1980s such as The Iron Sheik and Rowdy Roddy Piper are currently performing at L.A. clubs — Piper, in fact, has a new video today on Funny or Die.

But what Foley is doing seems substantially more sincere. He is a man, after all, who closed out his first appearance at the UCB Theatre by telling audience members to Google Mick Foley hardcore legend hell in the cell feminist.

And he cares about presenting himself professionally as a stand-up comedian. Before his gigs this fall, Foley followed 30 Rock‘s “World Champion” Judah Friedlander (who coincidentally performed in the film The Wrestler) to club gigs in and around New York City to learn the ropes of his new ring. The Comic’s Comic spoke with Friedlander to obtain his assessment of Foley as comedian.

“I’m not really his tag-team partner. It’s more like I’m managerial. He’s a young protege, and I’m showing him different ways to go about things, giving him advice,” Friedlander said. He said they’d met several years ago at a pop-culture/sci-fi/horror convention in New Jersey. “He had been doing a few shows, but it was all fans coming to see him. It was advertised. And I told him, ‘I think you need to get up in front of audiences that don’t know you’re going to be there. So one night, he came with me, got in my car and we went around and did like four clubs in one night (this summer).”

They also performed together at a couple of charity benefit shows. “I think if you’re giving someone comedy advice, there’s only so much to give them, because you don’t want to influence them too much. You need them to find themselves in their own art,” Friedlander said. “You can give them pointers and stuff like that. But it’s not good to overteach or overcoach someone when they’re first starting out in stand-up. Because you need them to find their own voice.”

How serious does he think Foley is about stand-up? He’s not just another celebrity trying to cash in on fame by pretending to be a stand-up? “I think he’s very serious about it. Yeah. Mick’s like the real deal. He’s also one of those guys…he’s one of my favorite wrestlers of all time. And as a wrestler, he was very innovative. He did several things that hadn’t been done before. Very innovative. Very funny. He was a great heel. He was a great face. He was great. And then, also, he’s written about five books and doesn’t have ghostwriters. He writes them all himself. He has a performance and writing background.”

As for Foley’s actual talent as a stand-up so far? Friedlander said: “Mick’s a naturally funny guy, and a natural storyteller. But one thing I was trying to get him to do, telling him, you have to try to get up every night. Get up a few times in one night, so you can really work on your stuff. That’s why New York is great. It doesn’t necessarily have the best audiences, but it has the most audiences. So as a comic, you can, if you get to a certain level, you can do several shows in one night and you can really hone and grow material that way. So I was telling him that. And also to learn how to do short sets. I think his first stand-up gig — you can ask him — he did like thirty minutes, forty minutes. He started headlining. ‘You should get used to the short sets, because it forces you to make things more concise.’ There’s all different forms of stand-up, but some kinds, it ends up being a highlight reel, where it’s boom-boom-boom.”

Friedlander has given Foley some other basic advice, too. He remembered one of their first gigs together, a charity event for Wounded Warrior, in which Foley sat in the front row for the entire show before it was his turn to go onstage. “I’m like, ‘Mick, you don’t watch the whole show when you’re on it, and you certainly don’t do it from the front row!’ As a comedian, most comedy clubs in New York, they don’t have a backstage, so you hang out in the back of the club. That’s the backstage. Or outside the club. You know. I’m like, ‘When you’re wrestling at Madison Square Garden, do you sit in the front row during all of the f***ing undercard matches?! No. You’re in the back. So what the f*** are you doing? That was a basic thing he didn’t realize….There were some things he just didn’t know.”

After Foley’s September post, he said he’d try to make sure his stand-up material was more honed and professional before putting it out on YouTube and elsewhere.

Here are a couple of examples of that, so you can judge for yourselves. First, here is Foley talking about meeting Tiger Woods. Roll it.

And more recently, Foley at a gig at Governor’s Comedy Club on Long Island, recounting some of his more infamous WWE/WWF matches and his wife’s reaction to them afterward.

If you want to see Foley’s stand-up in person, check his site for updated tour dates.

Bill Burr talks to me about his new special, “Bill Burr: Let It Go,” and filming a TV pilot with Kevin Hart