As I thought about this weekend's episode of Saturday Night Live with host Paul Rudd and musical guest Sir Paul McCartney, I couldn't help but think a bit more about last week's mysterious mess with Robert DeNiro. DeNiro has been a bit of a dud before, while Rudd was great when he first hosted two winters ago (the week Abby Elliott and Michaela Watkins joined the show, and Justin Timberlake made a cameo with Beyonce and the boys for their Single Ladies dance!). I wondered if any cast or writers held back their better pitches last week, knowing this week was coming. I also began to wonder, if they really wanted to get a host to promote Little Fockers, well, they had Ben Stiller there — but wouldn't it have been that much greater to see Dustin Hoffman host SNL??? It's a rhetorical question, because the answer is an obvious yes. How come that hasn't happened yet?

And as I got to thinking, I also realize fully now that this is Bill Hader's season. I haven't crunched any numbers, but my own memories of this fall's episodes reminds me that Hader, more than anyone else in the cast, has held court with his multiple celebrity impersonations (and Stefon) and by more literally holding court as the host of various game show and talk show sketches. Kristen Wiig hasn't been nearly as dominant, at least compared to last year, and whereas Fred Armisen, Andy Samberg and Kenan Thompson still get their fair share of face time, Hader is the glue holding this season together, such that it is.

But enough wondering. Let's get to the SNL All-Paul edition recap!

The cold open could not have been colder. I imagine the premise pitch went like this: President Obama has Stockholm Syndrome! Get it? And yet, in what felt like several minutes, I kept waiting to hear something resembling a punchline, and kept getting the sense that Fred Armisen was going through the motions of his impersonation. You can argue that someone with "Stockholm Syndrome" would seem like a zombie. And yet. And yet. There was barely any comedy in this sketch.

The monologue, on the other hand, was delightful, as host Paul Rudd had a misunderstanding with Sir Paul McCartney, and then featured player rookie Paul Brittain finally had his own chance to shine. Short and sweet!

That philosophy continued into the ad spoof slot, which didn't try to do too much. Establish your premise. Execute cleanly. Get out. You want gourmet cat food? We'll give you gourmet cat food! (Spoiler alert: It's still cat food)

And then there's the Vogelchecks. Otherwise known as the kissing family that kisses a little too often and a little too passionately with each other. We all know that SNL always has loved building recurring sketches and characters, but in recent seasons, it feels as though the writers aren't as creative in putting these characters into new and different situations. Instead, it has become more of a lazy cut-and-paste script situation. With the Vogelchecks, I do recall the kissing family got a bit weirder than usual during the Zach Galifianakis episode when they had them kissing during a funeral. But what did we get this time? An elderly aunt and uncle from Romania with their own style of kissing? A random and unexplained grabbing of Santa's jingle balls? And when Armisen's patriarchal character decided to explain to Vanessa Bayer's hesitant visiting girlfriend what the kissing was all about, there was absolutely zero payoff. Why didn't you have a payoff? Remember when Christopher Walken explained the importance of a wristwatch in Pulp Fiction? Now that was a payoff. This sketch: Nope. Just the same ol' appeal to audience freak outs and shriek outs from men open-mouth Frenching each other. At least the gum was a switch. Sort of. Otherwise, I'm done with the Vogelchecks. This isn't so much a recurring sketch as it is an idea that audiences have completely forgotten past Vogelcheck sketches, so this is somehow new to them. I suppose for the most casual viewer, that is nevertheless true. For me, though, this is merely ho-ho-hum.

The situational comedy improved significantly after a commercial break, when "What's That Name?" a game show cut from a previous episode's dress rehearsal, found its way into the live show. Hader plays the host, while Rudd and Bayer are contestants who must correctly identify the identities first of celebrities, and then of people they encounter on a daily basis. Like the doorman. Or the woman who cleans your office. Or your summer interns. The doorman example might be a bit NYC-specific, but the premise on the whole is so spot on. Loved it! "Say hi to the wife for me."

The SNL Digital Short started as if it were going to be a 9-to-5 parody, and then turned into something much sillier and cheerful, as most of the more absurd Lonely Island shorts are. We also got our second appearance by Sir Paul McCartney, who performed not one but two little ditties. This video isn't online yet, as they have to clear the music rights for the popular melodies that were used here. Soon, though, we hope! Stumblin!

A message from MasterCard about getting hacked by WikiLeaks then was abruptly hacked by WikiLeaks and Julian Assange (Hader), who quickly found a way to play Assange as a cartoonish villain full of threats to our most popular Web sites. Noticed the live studio audience was not quite as familiar with FarmVille as my friends are, but do still remember the old sitcom Hangin' With Mr. Cooper. Somewhere, Mark Curry appreciates the shout-out!?

This positive energy didn't carry through the next commercial break, however, as we were forced to endure the return of "Sexually Speaking," the talk show that host Dr. Linda Marie Choice never seems to make it to for one reason or another. In her place, we get her producer, Roger Brush (Armisen), who despite working on the show for years, somehow has zero knowledge about sex and is unaware that homosexuality exists. So he is mean and inconsiderate to audience members with questions, and that's about it. I know sex jokes are easy, but this is the premise? How is this guy the producer, anyhow? Or is SNL trying to say that behind every TV show, there's a horrible producer who knows nothing about the shows he/she is producing? If so, watch your back, Higgins!

For his first song, Paul McCartney and the band dipped into the Wings catalogue for "Jet." No, I don't know why. Because of the J-E-T-S Jets Jets Jets?! If so, nice work keeping the hex on them. My parents raised me on Beatles tunes, so I'm not sure what to make of this development, nor the sound mix on the vocals.

And now for Weekend Update with Seth Meyers, here are a few of their favorite jokes from the anchor desk.

McCartney made his fourth appearance of the show to help Meyers quickly re-enact the scene in which Prince Charles and Camilla reacted to rioters in London the other night. Look at McCartney, becoming a veritable Justin Timberlake as he pops up all over the place.

Stefon (Hader) also showed up, this time to give tourists some classic NYC holiday tips. Wait for the Taylor Negron reference! He also drops "Trenderson Cooper" and "Blingo" slang. I like to think that writer John Mulaney (who created Stefon with Hader) waits until dress rehearsal Saturday to let Hader read the cue cards for the first time, thereby ensuring he'll crack up at least once on TV.

So we're an hour — or two-thirds of the way — into the show, and we've barely seen Bobby Moynihan, and nothing from Jason Sudeikis, Jay Pharoah, Kenan Thompson and Taran Killam. That's weird, right?

Oh, well, what do you know? Here is Jay Pharoah now, debuting his very first character that's not based on an impersonation of a famous black actor, as he plays the principal who interrupts Rudd's math teacher at the high school's "Holiday Jam" with several announcements. He's what you would call a heavy breather. Thank you for that moment of silence. And here's Kenan Thompson as the math teacher. Who knows? This could be something.

As for "Meryl Streep on Ice," Abby Elliott takes Streep into new territory as a figure skater. They didn't really try to age Elliott up to play the part, though. Hey, look! It's J-Suds and Taran Killam on tape delivering testimonials (as did Bayer and Brittain, too), but is that all we're getting from these guys? This sketch was skating on thin ice. Thicken that ice! Who knows? This could have been something.

For his second song, Paul McCartney and the band went back to more classic Wings with "Band on the Run." Don't worry. I'm typing this recap late enough to know that things get better later.

So what comes next, I mean, last? How about more from McCartney? This hasn't happened in a while. I recall Coldplay played three songs in one show. But this is McCartney singing "A Day in the Life" from The Beatles classic album, "Sgt. Pepper's Lonely Hearts Club Band." He then segued straight into John Lennon's "Give Peace A Chance." A fine mini-tribute to his songwriting companion, Lennon, who was killed 30 years ago last week.

And in the goodnights, Rudd coaxed McCartney into playing one more song. Wait. That's five! Five songs! "Get Back."

That was our show, ladies and gents. With all of that music, I hope the cast is ready to stand and deliver this coming week on Dec. 18, 2010, with host Jeff Bridges and musical guest Eminem. Can't hardly wait.

Darrell Hammond returns to SNL as its announcer, succeeding the late Don Pardo 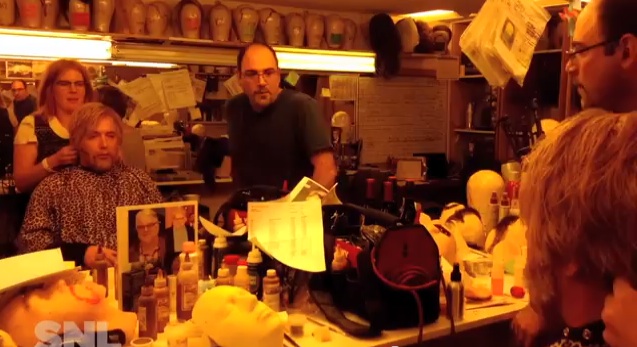 SNL behind the scenes: Hair and makeup making Beck Bennett up as Philip Seymour Hoffman