Don't know about you, but I entered this week's episode very conflicted. We have your host, Ryan Phillipe, who co-stars as the non-SNL lead with Will Forte and Kristen Wiig in the film adaptation of their SNL sketch, MacGruber, so more sketches for Forte and Wiig this week. Presumably a good thing. But when have we ever thought of Phillipe as funny? He'd have to prove himself. And then there's Ke$ha, who has a song that sticks in your head, but is wholly manufactured and could have been produced by anyone else. So what were we in store for? Probably a mixed bag. Let's recap!

The cold open is not political (yay!) and featured Larry King (Fred Armisen), in the news this week for his eighth divorce. But as I realized tonight, how many people in the SNL audience (live or at home) even realize who King is, that he is on CNN nightly, and that his looks and fundamental lack of understanding of the people he's interviewing is what makes him funny? I am old. We are old. That said, if you're talking 34-and-up demos, this was a great way to work in King's travails, the Iceland volcano, courtesy of Bjork (Wiig), and the impacts on air travel with Virgin Airlines honcho Richard Branson (Bill Hader). Bjork didn't quite generate enough laughs, nor did King's mispronunciation of Lady Gaga as Lady GooGoo. The audience did respond to Hader's Branson, though. And they knew enough not to drag it out, although it still felt long. Weird, right?

Phillipe's monologue was almost perfect. The promotional start was, well, necessary, but nice way to tie MacGruber in with other SNL recurring characters wondering when they'd get their own movies; among them: Target Lady (Wiig), Andy Samberg's early 1990s hip-hopper from "Dick in a Box," and Kenan Thompson's host from "What Up With That?" When he broke into song, you hoped he'd break out the whole sketch, and though Thompson did get in two digs on MacGruber, and Jason Sudeikis danced a little bit (sort of), and Armisen fake-played the sax, they didn't really go for it. Which made it feel a little incomplete. Better, funnier to take over the monologue and make Phillipe work to throw it to the fake commercial.

Which was a repeat fake ad for Broadview Security, in which everyone wants to attack a woman (Nasim Pedrad) in her home.

And then another edition of ESPN Classic's Twinkle and Stink, this time from the Today Sponge Women's Weightlifting Championships of 1986. As always, it's really inconsequential who is competing — in this case, Sue Ferrigno (Wiig) and Olivia Newton Cougar Mellencamp (Phillipe) — because it's about the broadcast interplay between the mustachioed duo of Pete Twinkle (Sudeikis) and Greg Stink (Forte). I haven't crunched the numbers on this, but it feels like we're seeing them as often as we used to see Will Ferrell and Cheri Oteri as the cheerleaders from a decade ago. And, just as in every other one of these sketches, the jokes come from Sudeikis coming up with slogans for the lady product and Forte not knowing how to answer questions. Is there a formula within 30 Rock that determines precisely how many weeks can go before recurring this sketch effectively? I mean, I usually enjoy it. So it must be working. This formula.

Finallly. Some actual ads. And then…

Who are these "Hip Hop Kids" who are just about all white? J Style (Phillipe), Baby Suggs (Wiig), Zig-Zag (Samberg), Lil' Prinzess (Abby Elliott), Flip-Flop (Sudekis) and DJ K Smoove (Thompson). They're trapped in a bear cave. This reminds me of that parody of the Insane Clown Posse Juggalos, except without the direct references. Oh, there's a bear attack. Or two. I feel like something was missing here.

An SNL Digital Short. OK. This was weird but in a good way. Phillipe goes after Pedrad to apologize about his love, but Samberg's unnamed loverboy already is on the scene. Change scenery. Rinse. Repeat. Heighten. Plot twist at the end! I don't dare spoil any of it more than I already have.

Ads, ads, ads. Meet Mort Mort Feingold, celebrity accountant to the stars, played by Samberg, is timely since April 15 was just the other day (though the opening and the interstitials play like a recurring character sketch), and it gives us a chance to see plenty more random impersonations, such as Kate Gosselin (Wiig), John Edwards (Forte), Tyler Perry (Thompson), Shaun White (Elliott), Robert Pattinson and Kristen Stewart (Phillipe and Jenny Slate), Mel Gibson (Sudeikis) and Susan Boyle (Bobby Moynihan).

Oh. Lookie here. It's an ad "spoof" about the Shake Weight, which is an actual product. I saw this during last week's dress rehearsal. The version I saw included Tina Fey, so obviously they edited/reshot it. I can say nothing else. Just watch. Completely safe for work, and yet completely not safe for work. Thank you, Shake Weight. Let me remind you. This is based on an actual product and actual ad!

Oh, so here is Kesha with her first performance, which begins weirdly before you realize she's going to do the "Tik Tok."

On Weekend Update, James Carville (Hader) chimes in on the Tea Party movement.

Father Swim Coach Scoutmaster (Forte) came in to comment on all of the allegations of child molestation from the Catholic church, Boy Scouts and swimming. "Why are you applauding for that?"

Second-hand news correspondent Anthony Crispino (Moynihan) offered some juicy tidbits on what's happening in politics and elsewhere. He gets his news from his sources. Wait. Why is he called a completely different name in Hulu — does Hulu think all Italian-Americans are alike? Me confused:

Here are the rest of the Weekend Update highlights:

Four guys in the yard together (Forte, Phillipe, Hader, Sudeikis)…is this the recurring sketch in which they listen to music, sing along and drop ultimate confidences? Yes. Yes, it is. Haven't seen this one in a while. Very few of these things have anything to do with "Breakfast at Tiffany's." Weird tag at the end. Necessary? Because they sing an actual song, you'll have to wait to see a legit video of this online.

After more ads, "Teen Talk" says it's with Dr. Cathy Carson (Elliott), but we open with Roger Brush, the producer (Armisen), who says he'll cover for her while she's sick. Hader is a helper in the audience. Phillipe plays a teen asking about when he gets pubic hair. Wait. I've seen this sketch before. Pedrad has acne issues. Wiig and Samberg both play characters with teen issues, too.

So on this second song, if that's what we're calling this. Why does Kesha perform with lights all over her body? It must help her keep in tune, right? "Your Love is My Drug" = your light beams is my auto-tune?

"I Got This!" is a fake game show base on real life, hosted by Hader, with the Astro family (
who will pay the tip), played by Phillipe, Sudeikis, and Forte. For round two, mother Astro (Wiig) shows up, to see who picks up the check. Watching my family dance this dance, this guy knows what they're talking about.

Uh oh, third time for the kickspit video with Sudeikis and Pedrad, this must be a problem! No, wait. this is a new video from them. With Moynihan and Hader rapping. Wait. What? That's not Hader, but Phillipe? My bad. Juggalos, reconvene! Play it!

That's it, folks. Next week should be…interesting…. 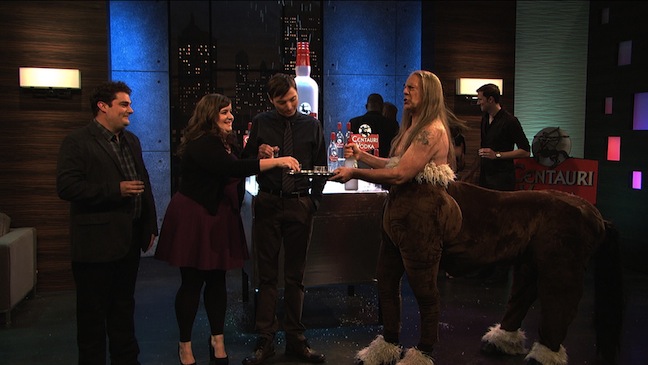