Millions of Americans tuned in (and millions more around the world saw clips) as Diane Sawyer made her full-time debut behind the anchor desk Monday night for World News with Diane Sawyer and shared an exclusive sit-down interview with Iranian President Mahmoud Ahmadinejad. They heard Sawyer level harsh accusations at Ahmadinejad about Iran's nuclear program, its treatment of its citizens as well as of three American hikers arrested after they crossed the border. They also heard Ahmadinejad refer to Sawyer as "respectable lady." But what most people don't know is that the voice they heard translating — or rather, dubbing — Ahmadinejad belonged to a stand-up comedian, New York City's Dan Ahdoot. Ahdoot has joked for years about his own status as an Iranian Jew. And he told me last night about being part of a landmark broadcast and interview.

Tell me how you got the gig? Do you offer Iranian translations for TV stations or other people as a side gig? And why did you decide to give him an accent? I know how you talk for real! I got the gig completely randomly. They never use comedians or voice-over actors, for that matter. They only use translators. However, the translators sounded really menacing, and they weren't into it. So there's a producer at ABC News who used to produce comedy shows at a bar in the East Village 10 years ago. She remembered seeing me at the Boston Comedy Club at a bringer night! And she remembered I was Iranian. So she looked me up, and I was in the studios the next day. It was their idea to have me do an Iranian accent and I was totally cool with it. All of those years of making jokes about my parents finally paid off.

And did you know that your plum gig was going to be watched by even more people since it aired on Diane Sawyer's first night in the nightly news anchor chair? I didn't know until it was about to air that it was her debut. The funny part is that we had my mom on the phone doing last-minute translations for some questionable phrases. For example, she was the one who helped with the "respectable lady" line he says that has gotten so much press! It was such a bizarre scenario, but definitely my favorite credit so far…Sorry Leno 😉

You can watch Ahdoot's appearance from October on The Jay Leno Show, plus other details here. And here is the ABC News interview between Diane Sawyer and Mahmoud Ahmadinejad, as seen on Nightline, with translations by Dan Ahdoot (here's the shorter World News version):

Dave Hill and Wyatt Cenac chat in an elevator

Reese Waters in new Versus show, “The Daily Line” 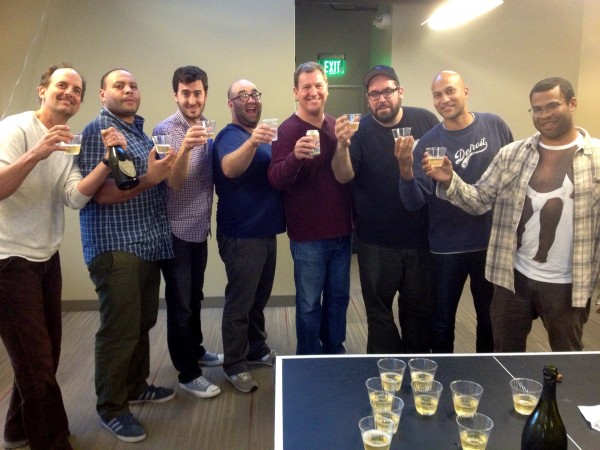