Martin Short blew into Chicago this week and created a flurry of excitement with the return of some of his most famous comedy characters, and may have even topped that last night by delivering zingers that shocked the live audience for the taping of Let Freedom Hum, the TBS special from Just For Laughs Chicago that will air a week from today, at 10 p.m. June 26. Taped bits in the special include the return of Lawrence Orbach, best known as Short's synchronized swimmer who couldn't swim in one of Saturday Night Live's classic short films, as well as Jiminy Glick, Short's oversized oaf of an entertainment journalist who sits down with the stand-ups in the TBS special: Greg Giraldo, Jeremy Hotz, Kathleen Madigan, Tom Papa and John Pinette. (Pictured at right: Martin Short as Jiminy Glick with comedian John Pinette, by Barry Brecheisen)

The live audience, which included Second City legends Harold Ramis, SCTV co-founder Andrew Alexander and producer Joyce Sloane (Short saluted each of them individually during breaks in the taping), saw Short open the stand-up comedy special with a taped sketch featuring Short in a scene as a pantsless Ed Grimley, who upon getting the TBS gig, breaks into song, knocks out Kevin Nealon in a cameo and gets a radical face tattoo. Once he took the stage, Short meant to knock himself down a peg or two, suggesting he was the cable network's second choice after disgraced former Illinois Gov. Rod Blagojevich — but Short tripped over Blago's name and decided to switch the target to Robert Blake. That was quickly followed by this aside directed toward the network and its most popular comedy programming : "Meanwhile, TBS viewers are saying, who knew Tyler Perry was so light-skinned!"

That would seem rather tame, however, compared to these quips from Short that drew gasps from the audience: To his accompanying pianist, Jeff Babko (the keyboardist in Jimmy Kimmel's late-night TV band), Short said that his new daughter was named Tangerine because they wanted to pick a fruity name, "Tangerine if a girl, Adam Lambert if it was a boy." (Pictured at left: Martin Short with Jeff Babko performing live Thursday night at The Vic Theatre in Chicago, by Edward Pio Roda)

On the difference between hockey and Scientology: "Unlike Scientology, hockey has let Katie Holmes escape."

On tensions in the world: "Look at Iran…They had fraudulent voting in a fixed election. Good thing that would never happen here in Chicago!"

He also sang a song about how Chicago made him want to cheat on his wife with Hillary Clinton, Mrs. Blagojevich, Paris Hilton and even Chastity Bono, and cracked at one point about him hosting a show for other stand-up comedians: "The last time someone opened for five comics, Tara Reid was in the back seat of a Prius at The Laugh Factory." OK. That last one was a bit dated. After the show, I got a brief moment to ask Short about how it felt to get back into his classic characters such as Lawrence Orbach and Jiminy Glick (Pictured at right: Martin Short surprising the crowd at Zanies Comedy Club in Chicago on Wednesday as wannabe stand-up Lawrence Orbach, by Jeremy Freeman). Our chat happened in the dark alley outside The Vic Theatre, so I don't think the video will suffice. Here, though, is what Short told me:

"This is strange. that was fun. Because some of those guys I hadn't done in a long time. Lawrence Orbach, which is a piece that is being edited as we speak, is a character I haven't done in 20 years, so it was kind of cool."

And also a much different element for the failed synchronized swimmer.

"Absolutely. It was the day in the life of a stand-up. We see him at home, in his apartment, and we actually — we did him in a club, and he was expected to bomb, but he didn't, so we had to change the tone of the piece."

"Yeah, that was fun. We just did that today."

Is it more fun to do that with comedians who are in on the bit?

"You know, all characters are different when you do them. Some are, you have to write them, be very structured. Jiminy Glick is a weird one for me. I just talk. I don't know what I'm saying. I look back at the playbacks later and say, 'What?' I use expressions that I never use. It's kind of perverse."

Martin Short also will be taping an appearance this coming Monday (June 22) on The Late Show with David Letterman, to air next Friday, June 26 — the night of the TBS special. 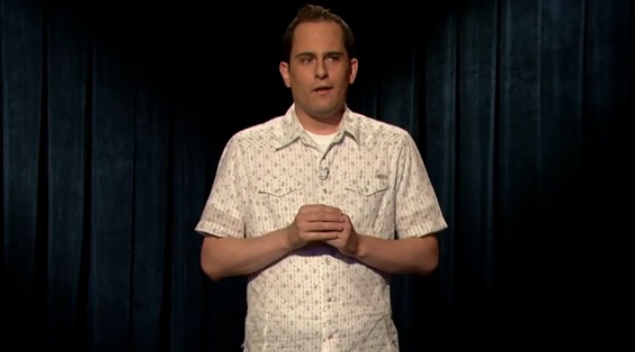 David Cross heads across the pond to film new UK comedy series (which will air in the US, eventually)

Conan O’Brien will answer your questions, but only on Facebook, and only on the Facebook Team Coco page