Saturday Night Live returned last night after two weeks off with a fresh case of spring fever and a ham sandwich of a host, and although I cannot say that any of the sketches are instant classics, I can say that the entire show was at least fairly funny from start to finish, and that is quite commendable. This also marks the first time that almost the entire show is available for viewing online. Wow. Let's get to recapping!

COLD OPEN: We start with politics, as usual. I'm beginning to wonder when was the last time SNL opened the show without something political. It is possible, right??? Meanwhile, back in parody reality, Will Forte as Treasury Secretary Timothy Geithner blamed it all on the Bush administration and offered a $420 billion reward to anyone with a plan to solve America's banking crisis, broken down by what would happen if more than one person had the plan. But what if six people had the idea? Still working on the numbers for that. Geithner takes callers, who disagree with one another. Caller three asks for the money first, then the idea. He scams a third of the money out of Geithner. Caller four gets Geithner to joke about how "everyone" has to pay taxes (he didn't). Caller five is a Nigerian prince scammer. Of course he gets some money from the government.

MONOLOGUE: The Rock's third time hosting, notes he has beaten Tony Danza, now tied with Rob Lowe. Jokes his nine-year transformation has gone so well, he didn't get cast in "The Wrestler." He breaks into song, singing how he's still tough. Flanked by Abby Elliott and Kristen Wiig in black lingerie. Kenan Thompson "hits" him with a chair, for a seductive chair dance. Fred Armisen plays his effiminate trainer/choreographer/roommate.

MACGRUBER: With MacGyver (Richard Dean Anderson)! Wiig plays the assistant Vicky as always. Wait a second. Isn't this what they did in that Pepsi Super Bowl ad that got everyone riled up? Not quite. This time, it's an actual MacGruber sketch, as MacGyver as "new guy" waxes nostalgic in a flashback (10 seconds?!) to when he and his missus (Elliott) give birth to a boy in an abandoned hospital in December 1972. Jason Sudeikis plays the doc. And MacGyver names him MacGruber. MacGruber MacGyver. Plot twist! But wait, there's more. Michaela Watkins plays the assistant to MacGyver and…

Here comes easily the best scene that you knew was coming, almost.

THE ROCK OBAMA: We're in the Oval Office, and Armisen is Obama, with Andy Samberg as chief of staff Rahm Emanuel, preparing for a meeting with GOP senators John McCain (Darrell Hammond), Kay Bailey Hutchison (Wiig) and Tom Coburn (Forte). Rahm wants Obama to "get angry!" You don't want to make him angry, because he turns into…not the Hulk, but The Rock Obama. Of. Course. Barack Obama becomes The Rock Obama. Simple yet genius idea. "Don't be alarmed, the Rock Obama…much like Barack Obama. Only stronger. And more impulsive." He tosses Coburn out a window as Rahm smiles. Rock smash phone. Was it all just a dream, though? Oh, why did you have to go and do that. Me like dream better as alternate reality. Blogger frustrated. Blogger pound keyboard.

MACGRUBER #2: How much do you love, me daddy? A bunchy bunch, or an itty bitty? Then why did you leave me? Flashback. He left for a stripper? Door's locked. MacGruber!

ACTIVIA: Jamie Lee Curtis (Wiig) says she's so excited to do another TV ad. Sudeikis is on hand as the director. "People need to poop!" She offers to pay for a new couch. Testimonials come in to be taped. First up: Elliott. Wait! What's this? New SNL writer John Mulaney is on camera as a stagehand clacking the clickety-clackboard?! Hooray. Let's all pause to enter this into the record: 11:54 p.m. Eastern Standard Time (btw, remember to spring your clocks forward on Sunday morning for Daylight Savings Time, where applicable). And let us all hope that this is a harbinger of more John Mulaney on SNL to come. Meanwhile, back in the sketch…Uh-oh is the look on Elliott's face. "The set of an Activia commercial is a no-judgement zone," Jamie Lee says. "We're all adults." So everyone on set keeps eating Activia, which means they all start pooping their pants. Ah, memories.

HAWAIIAN RESTAURANT (Kauai): The Rock and Armisen roam through the dining area singing and playing the uke. Couples at dinner. Bobby Moynihan and Watkins on their honeymoon. But the workers are cynical and jaded and unhappy and ready to tell you all about how much they hate fat white tourists. Bill Hader and Casey Wilson are from Boston. Samberg and Wiig think it must be peaceful being near the beach, but these guys live 15 miles inland near a meth lab. Hammond is alone, wants to be skipped. Respect! Thompson and Sudeikis make a joke about getting lei'd. Drinks get spilled. Forte and Elliott sit at the bar. Aloha can mean hello, goodbye, or suck it. "Yeah, Aloha hard!"

MACGRUBER #3: Their relationship has soured. Not talking to each other. Wait. Post-script flash-forward to Spaceport: 2040 to finish the joke. "Do you want some alone time?" Maybe he should. Moon-raker! Here are all three in one.

RAY LaMONTAGNE #1 Sings "You are the Best Thing." He is great. That is all.

WEEKEND UPDATE Here are the guests, including two celebrity cameos!
RNC Chairman Michael Steele (Thompson) answers critics about his comments on CNN about Rush Limbaugh. Oh, see, the Limbaugh people put an electrode on Steele's head to shock him anytime he goes off message. Plays off a classic short-form improv game.

Cathy (Samberg) comments on a poll about sexy cartoon characters, and why she didn't win. If you are a Cathy fan, funny. Then again, who is a Cathy fan? Oh, right. Frustration squiggle. And Justin Timberlake pops in to play Cathy's husband, Irving. Audience shrieks! "If Jessica Rabbit walked in here right now, I wouldn't even blink!" What if it were Jessica Biel as Jessica Rabbit?! Mamma Mia!

Jon Bovi (Forte and Sudeikis) weighs in to comment on the economic impact on the record industry. They sing opposite lyrics to Bon Jovi music. So they also have bands called AA Bottom and Staying Put. And even an example of hop-hip. Oh, you guys.

GAME TIME WITH DAVE AND GREG: It's a sports talk show (Johnson and Hader) talking March Madness. This is the second sketch of the night offering call-in voices. Greg is not an alien? Or is he? Greg has no eyebrows, never ages, calls everyone Chuck, talks strange and doesn't know human stuff. Dave spills water on Greg and he gets shrieky and smoky. And he apparently eats the athletes who come on as guests. Odd, but OK, we'll roll with it.

PROMOS FOR CELEBRITY APPRENTICE: (Hader is off-camera directing) Donald Trump (Hammond) scores some laughs with his many references…the show scores well in DVR among the 30-35 douche demographic. I bet! First up, Tom Green (Armisen), doing the NBC chimes. "Let's keep this parade of the ding-dongs moving!" Well put, Trumpy! Joan Rivers (Watkins). Nice. Love her. Dennis Rodman (Johnson). This is all expected, and still well executed.

RAY LaMONTAGNE #2 He does "Trouble" off of his wonderful debut disc.

LIGHTHOUSE: Five minutes to 1 a.m., and Johnson shows Wiig his home atop a lighthouse during/after a date. He turns off the light to set the mood, and suddenly, old-timey sailors from the 1800s are washed up on the rocks in a wreck (Samberg in eye patch, Forte in Cap'n Crunch outfit). The Lighthouse is hooked up to the Clapper. More wrecks from the 1900s (Moynihan and Hader). An oral sex reference! Lights go out. Sudeikis has a jet ski run up ashore.

GOODBYES: "We kicked ass!" You know what? They kinda did. 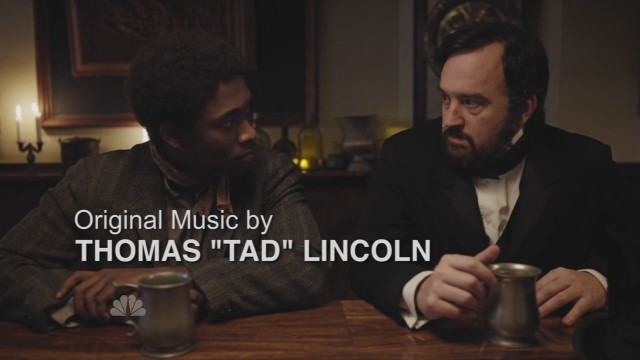