Listen up, Saturday Night Live. You know, I know, we all know that the media and mainstream America began paying more attention to you this season because of how you handled the presidential election. We get it. That doesn’t mean you need to try to play politics every week. It just doesn’t. Which brings me to the cold open…(Note: I shall update with video clips once they become available either on Hulu.com or NBC.com)

Cold Open: Fred Armisen (Senate Majority Leader Harry Reid) and Kristen Wiig (House Speaker Nancy Pelosi) give a statement to the press about bipartisanship (or lack thereof) in the new Obama Administration concerning Congressional votes on the new stimulus package. If you haven’t been paying attention, barely any Republicans have supported this. Three things. 1) You don’t need to open with a political sketch if there’s nothing funny to say. 2) If you’re going to try,
please have them do something other than standing and talking. Action, please! And 3) At least it was mercifully not horribly long.
Monologue: Host Bradley Cooper shows footage from when he was on Inside
the Actor’s Studio…in the audience. As a student. Sitting up front.
Sad but true, which makes it the sad kind of funny. Then he shows off what he
learned in his “classical training” to be the bully, based upon his role in the film Wedding Crashers. Of course, this meant we were also forced to see an unfortunate cameo from James Lipton, still only too happy to embarrass himself as he takes another step toward becoming our new Richard Simmons. In fact, he may be there already.
The Today Show‘s fourth hour with Hoda Kotb (Michaela Watkins) and
Kathie Lee Gifford (Wiig). Funny the first time, so not surprised to see them back so soon. “What are we, Benjamin Button and Yoda over here, Yoda Kotb?” The actual show and its producers seem to revel in being a hot mess, so it’s only too easy to mock. An audience member yells out in glee when Michaela/Hoda pulls out a Snuggie — “Snuggie!”
— and Michaela rolls with it. Kristen/Kathie Lee makes a racist joke. Bradley Cooper is their guest as Mr./Ms. B, who trains women how to walk the runway for all sorts of reality programs (a play off of an actual cross-dressing man from America’s Next Top Model and other shows). Runway antics ensue. The lighting crew tries to take out Kathie Lee, to no avail.
The first ad break includes a commercial for The Lonely Island’s new CD, Incredibad, which is out Tuesday and includes a DVD of SNL Digital Shorts. I smell foreshadowing.
Time for a “game” show, “I’m Gonna Have Sex With Your Wife.” Cooper plays host
Danny Lane. Our contestants: Will Forte, Armisen, Bill Hader. Hader frowns as he’s the returning “champ.” Forte’s wife played by Watkins. “I’d like to see you try!” Forte says. Cooper and Watkins disappear…and as the music plays, Forte emits a look of silent despair. 50 points! Armisen’s wife played by Casey Wilson. 100 points. “Honey, you’re winning!” “Who’s winning here?” Hader says he and his wife are now separated after last week’s “win.” But she (Wiig) surprised him by showing up again. The consolation for the other guys? The “home game.” Sad, cruel, twisted, funny.
An SNL Digital Short: It’s the Lonely Island boys. Andy Samberg wins a boat ride for three. And he picks Akiva and…T-Pain?! Sorry, Jorma. Music video time. “I’m on a Boat!” Akiva gets him some camera time! But T-Pain steals all of the laughs when he sings, “I never thought I’d be on a boat.”

Jason Sudeikis, Forte, Hader and Cooper in suits, drinking at a funeral. It’s that recurring sketch about buddies getting nostalgic and weird over a song, this time singing along to their fallen friend’s favorite song. It’s Mr. Big’s “To Be With You.” Sudeikis cracks about getting caught by his girlfriend masturbating to Internet
porn…in a Starbucks. (laughs) Hader says how his dad dropped a bombshell on the family by saying Hader’s 25-year-old sister was adopted…but he’s thrilled, because now they no longer have to sneak around and can get married! (groans) Forte, I believe, does a callback to when he got his penis stuck in a jacuzzi jet? Well…he kinda wants
to do it again! Cooper talks about getting tricked on an Internet date when a 50-year-old black guy showed up…he was expecting a 12-year-old boy?! (groans, laughs and shrieks) Sudeikis is loving singing, and we know Forte enjoys singing whenever he can. This routine is not going away anytime soon.
Ads, followed by the first TV on the Radio song, then more ads.

Weekend Update. I enjoyed the quip about Black History Month, not to be confused with A&E’s Black Mystery Month (and liked it further when I found out via Twitter that I knew who wrote it?!). As for the guests:

— Mark Spitz (Samberg) to comment on Michael Phelps and his getting caught smoking pot. Lots of silly sex euphemisms and puns. Punishment for Phelps? Maybe take away two of his gold medals. So Spitz remains the champ.

— James Harrison (Kenan Thompson) to comment on his record 100-yard INT and TD for the Steelers in the Super Bowl. Still catching his breath with an oxygen mask. Seems simple, gets lots of laughs.

— Bjork (Wiig) to comment on Iceland’s economic crisis. It’s bad, people. She even wrote a song about how bad it is.

— Really!?! With Seth (no Amy) about Kellogg’s cereal characters all looking like pot heads or hallucinations, and how that doesn’t jibe with company’s decision to drop Michael Phelps. Tells off USA Swimming for giving him time off, as if that’s punishment. Tells parents to tell their kids they can smoke pot…after they win 12 gold medals for their country. And calls the kid who sold the photo to a tabloid a dick. So it turned out way better than I would have expected.

We’re in a locker room after a hockey game with players (Cooper, Forte, Sudeikis). Watkins enters, sporting staff credentials, asks if her 7-year-old son (Bobby Moynihan) can get a picture with the players. He’s overjoyed to meet Forte and Sudeikis, not so much Cooper. Darrell Hammond shows up as the team’s trainer, Bert, and little Guy gets excited again. Cute.
The talk show: “Bad Guys, Good Conversation.” It’s obscure movie bad
guys, that is. Only they don’t turn out to be obscure at all, really. Hosted by Cooper as Johnny Lawrence from The Karate Kid, Samberg as Hans Gruber from Die Hard, Watkins as Alex Forrest from Fatal Attraction, and Hader as Buffalo Bill from Silence of the Lambs. Sudeikis interrupts as the overbearing producer/sensei! Watkins and Hader inhabit their roles with lots of funny. Cooper sounds like Jon Hamm, weirdly enough. Very much enjoyed this sketch.
A family comes together for an intervention on behalf of a son’s (Samberg) drinking problem. Hader is running it as counselor Matt Sajak, Pat’s brother, and no he can’t get you tickets. Weird little joke within the sketch. Wilson and Forte play his parents. But it’s really all about Cooper and Wiig as Aunt Tina and Uncle Bill, who cannot stop disrupting the intervention by making noise. First, it’s sanitizer lotion. Then the self-tanning lotion. Then a mustard bottle pump? Then stain remover. Then a blood pressure pump. Then her sneakers. Then his butter churn? Then a pump for an air mattress. Then sex in a rehab van. Sure, why not. It was interesting, at least, to see how the crew managed to get the props in and out of camera shot every few seconds.
Ads,TV on the Radio’s second song, which talks about newspaper reporters, then more ads.
We’re in the final 10 minutes, and Cooper takes on the Christian Bale on-set audio meltdown, playing Bale as a guy willing to make good on it all, by selling a DVD: “No Bruce! Let Me Finish! The Best of Celebrity Tirades,” including George Foreman (Thompson), Joan Cusack (there’s Abby Elliott!), CNBC Mad Money’s Jim Cramer (Hammond) not angry, though, and Nathan Lane (Moynihan). Forte gets in the way of Cooper’s Bale throughout, for the obvious reasons.
That’s it! See you next week with Alec Baldwin and The Jonas
Brothers…why was Drew Barrymore standing on stage with Cooper for the farewell if she
didn’t bother making a cameo?! A mystery for another blog… 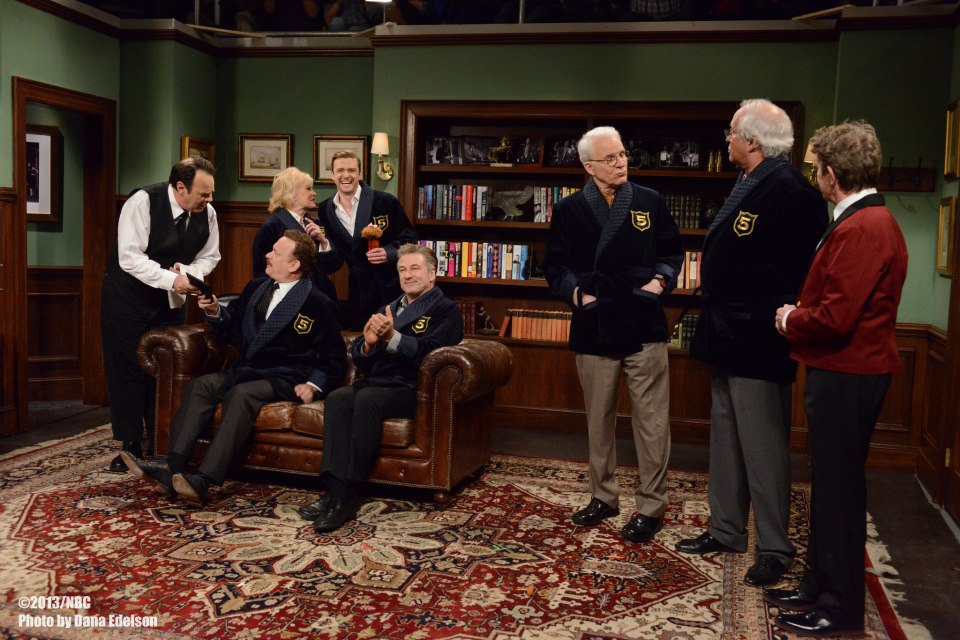