With all of the hoopla this week about Saturday Night Live adding two new cast members in Abby Elliott and Michaela Watkins, and the comedic prowess of Paul Rudd hosting, who would figure that the most memorable parts of this episode featured surprise performances by Justin Timberlake? Timberlake’s vision of his Thanksgiving SNL that could have been turns out to be hilarious enough that you suspect Lorne Michaels is figuring out how to make that happen, and then there was the outrageously funny music video choreography scene with Timberlake, Bobby Moynihan and Andy Samberg backing Beyonce. The latter featured our first live looks, albeit briefly, at the newbies Elliott and Watkins. But we like to read our recaps in the order of appearance, so rewind!

Our cold open is brief for a change, with a message from Vice President-Elect Joe Biden (Jason Sudeikis) in which he describes his "Biden Blunder Scale." Biden is the one politician we haven’t been talking about since Election Day, so he vows he’ll be as entertaining as Sarah Palin. And roll the credits…

Two thoughts before we move on. Amy Poehler still gets listed in the opening credits (and also as part of Weekend Update later) even though she has left the show. This is not an oversight. Perhaps a tribute to her, or some way to make sure she gets paid? Anyhow. I thought I heard Don Pardo call Andy Samberg "Andy Sandler" but definitely heard Pardo call Michaela Watkins "Watson." Oy.

Paul Rudd’s monologue: Rudd joked about getting picked to host after the election, after the buzz and heat on the show has passed. "It’s like being in Times Square on New Year’s…Day." Rudd also said, "if you love Tina Fey as Sarah Palin," introducing Kristen Wiig as Arizona governor and potential attorney general Janet Napolitano. Just to drill home the point.

Our ad spoof is for "Sproingo," the only erectile dysfunction pill that announces it’s working with sound effects. Wiig and Sudeikis play the happy couple. A topic more than ripe for parody.

Now it’s time to meet the Vogelcheks. Am I spelling that right? You tell me. The important thing for Samberg’s character to remember is that the Vogelcheks like to show their affection for one another. Rudd is Samberg’s college roommate, and Wiig and Fred Armisen play the parents, with Bill Hader as the older brother. And by affection, did I mention that they kiss each other. A lot. It freaks Samberg out. It even freaks Wiig’s character a little bit when Armisen smooches her eyeball for what seems like forever. But. Happy ending! (So to speak)

After the first ad break, we get the return of the "Scared Straight" sketch idea with Sudeikis as the cop, Kenan Thompson as the prisoner scaring the juvenile delinquents, or trying to scare them with the plots of popular movies. Hader, Samberg and Rudd play the teens. I’m not sure why we’re seeing this sketch again, but we just did.

An SNL Digital Short! Deliciously absurd. Samberg approaches Rudd in his dressing room, asks: "May I paint you?." Nekkid, obviously. Rudd returns the favor, then they decide to auction off this masterpiece. And everything goes horribly awry. Abby Elliott makes her first appearance by vomiting, while Michaela Watkins is an old lady praying, Moynihan is poking his eye out with a pencil, and Hader and Wiig are re-enacting the penultimate scene from Raiders of the Lost Ark. "Cover your eyes!" But that’s all a set up to the film "Everyone’s a Critic," and when Casey Wilson interviews them, well, there’s your ending.

Time now for a country music songwriting showcase, opening on Thompson in mid-song. Will Forte hosts the showcase, and introduces a husband-wife duo, played by Wiig and Rudd. Their lyrics devolve into a recitation of tracking numbers for a package, with several cuts back to Forte wondering when the tracking numbers will ever end. So he ends it himself. If only you’d let them finish the song!

Road trip! Turns out this is that returning sketch in which the fellas (Sudeikis, Forte, Hader) hear a song and start getting nostalgic with crazy stories. Only this time, they’re in a car, not a bar. Rudd is driving. The song? Ricky Nelson’s "Garden Party." We get a Palin family joke, urine, cocaine, and where’s Rudd’s cell phone? Oh, it’s in his butt. On vibrate. And there’s a Pulp Fiction ending. "But it’s all right now, I learned my lesson well. You see, ya can’t please everyone, so ya got to please yourself."

Beyonce’s first song of the evening, "If I Were A Boy." Beyonce must really like that magic tape, right? Or does she just enjoy wearing outfits that defy the laws of gravity and cleavage? I’m not complaining. Just asking.

Weekend Update with Seth Meyers, solo again, though Amy Poehler gets mentioned in the intro voiceover again. We hear a Facebook joke hoping President Obama doesn’t get crazy with his status updates. Meyers does another multi-tag joke about a German man with no arms stealing a TV from a store. Bobby Moynihan appears as cartoon character Snagglepuss to protest California’s Prop 8 banning gay marriage. With his partner, The Great Gazoo (Forte), even! Heavens to mergatroid! Exit stage left! That was funny.

Even funnier: Justin Timberlake’s appearance at the Update desk to describe what he had hoped to do for the Thanksgiving week show as host. He had the whole thing mapped out in his head. So he plays out the entire program himself. A slow start. But then he revs up, singing "I’m bringing turkey back," "some ad parody I’m not in," the Vincent Price special: "of course, I’ll play James Dean," an SNL short "cut a hole in the turkey…bad idea," "Kenan in a dress, introspective moment," joke joke joke, Nicholas Fein, joke joke joke, Target Lady, Barry Gibb talk show, second song, his Michael McDonald impression, "what a great show, I’d like to thank Jimmy Fallon and Sen. Chris Dodd for stopping by." You know what? That actually sounded like a fairly great show. Book it!

And then, after some more ads, behind the scenes of Beyonce’s music video for "Single Ladies." Rudd plays the director. Darrell Hammond makes his briefest appearance as stage manager. And here are Timberlake, Moynihan and Samberg as her background dancers, er, "dance biscuits." Newbies Watkins and Elliott have bit parts, too. Blink and you miss them. But you probably were looking at the fellas in their skimpy outfits, anyhow. Rudd: "Beyonce, that was be-rilliant! Why would you stop?"

The final half-hour is normally quite weird. This night, however, well, it seemed less like the wild cards and more like the leftovers. Forte and Hader play SWAT cops trying to talk Rudd out of jumping from a building ledge. Don’t. The cops end up loving each other. Then Hader and Rudd play parking garage guys talking about gay people, and it turns out they end up doing all sorts of gay stuff and are lovers, too. Beyonce does her second song, for "All the Single Ladies." And we end with "a movie by Fred, Bill and Noah," called Clearing the Air. No, no, no, no. Yeah, yeah, yeah, yeah. That’s a wrap! See you next Saturday!

This may have been the gayest edition of SNL ever. And by gay, I mean they really went out of their way throughout the 90 minutes to counter Prop 8 and other recent votes against gay marriage, showing gay characters, straight guys in love, and families where the guys kiss each other. No luck on the lady love, though. And seeing as Elliott and Watkins barely had time to get the full tour of 30 Rock, I’m sure we’ll see more of them next week. They don’t have to make out. Unless it’s in the service of the sketch. Of course. 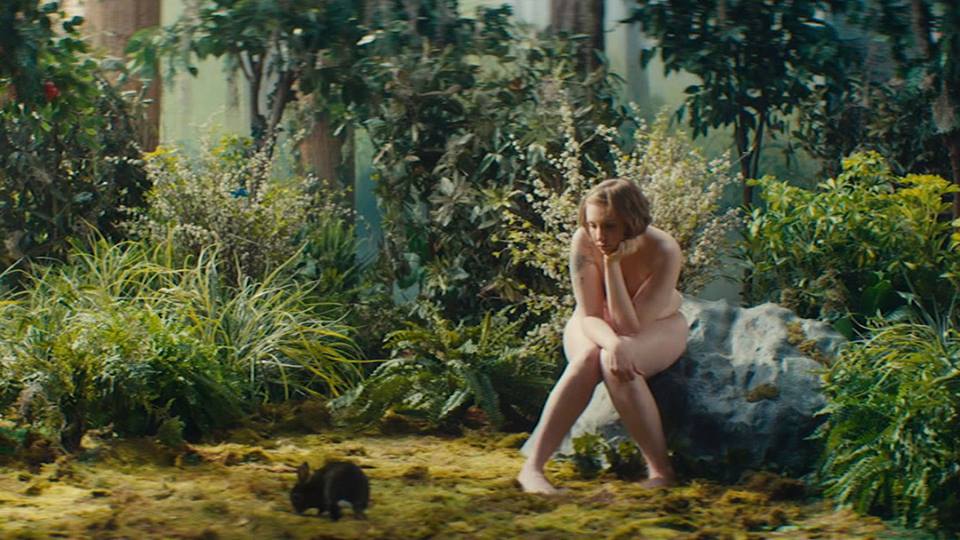