You don’t often see a comedy club audience wait outside in the brisk November air for more than an hour after midnight, for a show that doesn’t start until 1:15 a.m. and stretches through to 4:30 a.m., with few of the audience members leaving to go home to bed. Then again, when you have a chance to hear Dick Gregory and Paul Mooney speaking their minds, back to back, just days after the United States has elected its first African-American president in Barack Obama, well, exceptions can, will and should be made. It would be a night and early morning Sunday in which we, the assembled, were told how it was and how it is, an early testimonial that also happened to have plenty of jokes for those who turned out to Carolines for this special New York Comedy Festival double-header (you can also catch them at 10 p.m. tonight, Sunday).

I hadn’t seen Gregory since the Aspen festival in 2002, when he received lifetime honors for his comedic work in support of free speech and the First Amendment. Now 76, Gregory has not lost a step. Still very witty, topical and able to dismiss a loud audience member with ease. Gregory took the stage to a standing ovation, and within minutes, was acknowledging an audience member at one of the front tables as 95-year-old Irwin Corey, aka "Professor" Irwin Corey, the comedian who gave Gregory his first big break in the business by taking a night off from his own stand-up duties for Hugh Hefner and the Playboy Club. That allowed Gregory to become the first mainstream black stand-up comedian, paving the way for all who followed. Gregory thanked Corey, then quipped: "If I talk for two hours and Paul talks for two hours, we might see a white guy die tonight!"

Gregory on what Obama’s win means for black role models: "The two biggest losers weren’t white folk — they were black entertainers and black athletes." On the Rev. Jesse Jackson crying on Tuesday night, noting Jackson is coldblooded. Why? "Anytime you see a brother cry and don’t wipe tears…"

Gregory also had plenty to say about the ongoing economic crisis, including a stab at General Motors and its dwindling stock price: "These are the white folks who hate welfare. Now they’re begging for it!"

He mixed in jokes about his own family life and his children with historical lessons and crowd work. And he reminded us all that he actually ran for president himself 40 years ago in 1968. "I don’t need to be validated by the New York Times or the Washington Post," Gregory said. "I was there." And 75 minutes later, we all felt a little bit wiser for being in his presence.

Not that going onstage close to 3 a.m. would pose problematic for Paul Mooney!

Mooney quoted James Brown in his opening, "I’m black and I’m proud again," wishing Brown could have lived to see Obama’s victory. Mooney incorporated headlines of that very day into his act, from the Bush’s dog biting a White House reporter to an eight-year-old boy who shot his father. He had plenty to say about the women of The View, and hardly any of it was positive. Over the course of 100 minutes, Mooney took shots at celebrities here and there, told some dirty old jokes from his repertoire, and every once in a while, slowed down a bit to talk about the African-American’s place in society. "When you talk about lynchings, everybody get quiet," he noted at one point.

And toward the end, before a rousing closing bit in which he sang his potential lyrics for a Nat Turner musical, Mooney addressed those who’d wish he would tone down the racial politics of his act. "I’m not lightening up. I’m tightening up!" he said. "I’m going out like this." Mooney thrives on speaking his mind and making folks of all races a little uncomfortable by confronting the truth head-on.

Robin Montague served as the night’s host, and her friendly level of crazy put everyone at ease for the laughs and lessons to come. 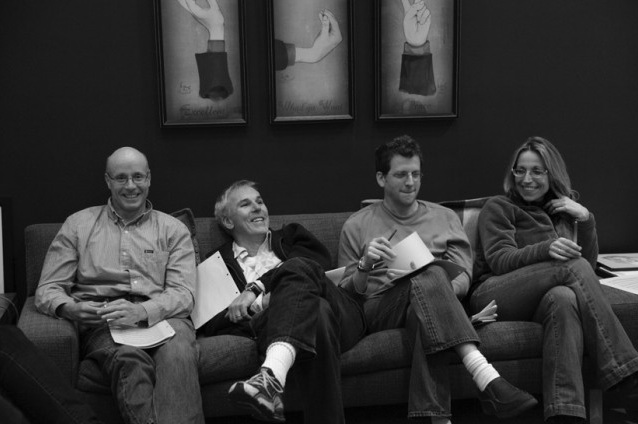 A day in the life of Conan