Just watched a rebroadcast of HBO’s 1995 Young Comedians Show (it’ll also air at 10 p.m. Pacific tonight), hosted by Garry Shandling from the U.S. Comedy Arts Festival in Aspen, and featuring a cast of, would you believe, Dave Attell, Eric Tunney, Dave Chappelle, Anthony Clark and Louis CK. Quite a lineup, eh? We know it’s 1995 because Shandling jokes about the O.J. Simpson trial and Lorena Bobbitt.

Eric Tunney is a Canadian, and perhaps the only one from this crop that you don’t remember. Although his joke about Hitler ruining that mustache certainly has garnered more than a few fans over the years, hasn’t it?

Dave Chappelle, even in early 1995, showed enormous talent, and in his opening line, paved the way for years of Aspen jokes about the lack of black people. But he played it big with a lengthy pause before asking, "Where are you hiding all of your black people?" Sharp material on race. He mentions how he spent three years in a small town in Ohio (which he liked more than he’d let on, apparently), tackles the poor choices made in fashioning Wonder Woman as a role model, and closes with his own superhero, Trick Whitey Man.

Anthony Clark, introduced as the college entertainer of the year, would get the first big break of anyone in this special, appearing in several episodes that fall on the Ellen sitcom, followed by his own sitcom the following year in Boston Common. When I saw him cracking up at his own jokes on a panel of Emerson College alums in 2006, I wondered if he had completely lost it. But here he was, back in 1995, cracking himself up as he joked at length about Oklahoma (a topic that Bill Hicks explored in his young comedians special in 1987, by the way), and being in a bad gang in Los Angeles ("the Lemon Slushies"). 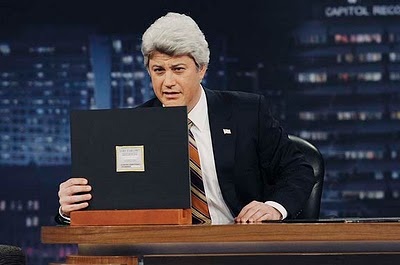 What do you think Jimmy Kimmel thinks about NBC replacing Leno with Fallon?